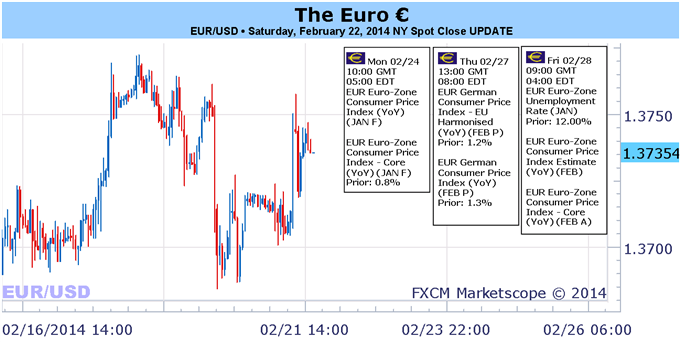 - Retail crowd positioning warns of an extreme (and potential top) in the Euro.

- Have a bearish (or bullish) bias on the Euro, but don’t know which pair to use? Use a Euro currency basket.

The Euro was a top performing currency for the past week, but the ‘feel’ to the market wasn’t that of optimism surrounding the Euro. Instead, the Euro seemingly settled at the top of the pile as a result of weakness elsewhere, rather than intrinsic strength: the Australian and New Zealand Dollars were hit by weak Chinese data; the British Pound by underwhelming inflation and retail sales figures; and the US Dollar by continued divergence by the actual state of the US economy and the Federal Reserve’s hopeful path.

Yet as these issues crop up else allowing the Euro to showcase its resiliency, it’s impossible to ignore the potential for weakness ahead given the market’s obsession with Euro-Zone inflation figures. With secondary and tertiary data (PMIs, ZEW Surveys, IFO Surveys) suggesting that any economic rebound seen in the Euro-Zone is expected to continue at a positive, albeit slow pace, threats of policy action to ward off the appearance of impending deflation is the only major threat to the Euro at present time.

This week, several data points on inflation in the broader Euro-Zone as well as its largest economy, Germany, will be released. On Monday, we’ll have the final January Consumer Price Index figures for the Euro-Zone, and the tone for the Euro could immediately turn sour for the ensuing days. Near-term deflation is evidently existent, with the monthly reading due at -1.1%, although the yearly is expected to maintain its post-2008 crisis low of +0.7%.

Inflation data out of the Euro-Zone will remain mixed at best on the week, with the final CPI Estimate for January (due on Monday) and the initial February estimate (due on Friday) expected to show only muted inflation forecasts going forward. The January figure at +0.8% (y/y) would mark progress but for the fact that the consensus for the February release is for +0.7% (y/y), what would be a step backwards.

Any Euro weakness on these figures could be reversed by Friday, when the German CPI for February is due and is expected to show readings of +0.6% (m/m) (from -0.6%) and +1.3% (y/y) (unch). It is important to respect the fact that the European Central Bank has only shown the proclivity to act when German inflation figures turn negative (implying deflation): both the November 2013 rate cut and the July 2012 promise by ECB President Mario Draghi to do “whatever it takes” to save the Euro only came after Germany saw monthly deflation readings. Such is not the case here, and therefore, any hopes of further dovish policy action may be curbed. (Read more: the ECB may be keeping inflation low for other policy reasons.)

It is inherently necessary that the Euro weather the incoming storm of potential dovish policy-inspiring data as conditions for the Euro may have started to erode. The Citi Economic Surprise Index dropped to 1.8 on Friday from 15.0 the week prior and 25.3 a month earlier; what this means is that economic momentum is starting to taper off for the Euro. Although Italian and Spanish bond yields remain low (Italian 10YY at 3.595% on Friday, Spanish 10YY at 3.541%), banking stresses are inching up with the interbank lending rate (EONIA) up to 0.171%, above its 20-day rolling-average of 0.156%.

The stage is set for the Euro’s resiliency in 2014 to take a dent. With the ECB set to meet the following week on March 6, it is inevitable that any weakness in inflation data between now and then will stoke speculation over purported dovish policy action. Yet with signs of growth starting to emerge and financial crisis conditions absent, we maintain that a BoE-styled Funding for Lending Scheme (FLS) has become more appealing for the ECB as it could address credit concerns without putting the Euro at risk of a massive ECB balance sheet expansion that another LTRO or a Fed-styled QE would bring. –CV