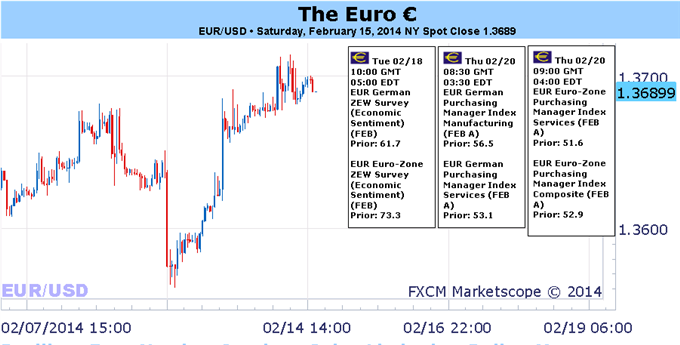 - The retail forex crowd remains short EURUSD – and has added to losing positions.

- The Euro’s relative fortunes may be improving as the tides have turned against the US Dollar.

- Have a bearish (or bullish) bias on the Euro, but don’t know which pair to use? Use a Euro currency basket.

Last week didn’t provide much of any considerable price action in the FX markets, and the Euro’s performance mirrored that of the broader market. The EURUSD did gain +0.42%, but that’s all the gains the Euro could find; yet losses were limited to a maximum of -0.41% against every other major currency but for the British Pound (-1.62%) which is in a world of its own right now.

Midweek the Euro looked shaky for one of the only reasons to entertain a bearish Euro bias at present time: threats of policy action to ward off the appearance of impending deflation. Several European Central Bank policymakers have suggested one of a cut in the main deposit rate, another LTRO, or even weakening the Euro directly could be employed. None of these calls are coming at a time when crisis conditions are present.

Not surprisingly, the more aggressive dovish commentary in recent weeks has come from France, a country with a declining rate of export growth over the past three-plus years. French exports have fallen from +10.7% y/y in the 3Q’10 to +1.5% in the 4Q’13. A weaker Euro would absolutely help French exporters get a competitive edge. But it’s much easier for policymakers to blame a seemingly crooked exchange rate for the problems than the misguided policy created by their own hands; c’est la vie.

There has to be good reason for the ECB to remain on hold all these months despite the continued downswing in inflationary pressures. Even as export growth in the region has been stunted, a stronger Euro might not be such a bad thing for the Euro-Zone at present time. With unemployment rates, especially among the youth, elevated to at or near all-time highs, inflation would more quickly erode purchasing power from a struggling consumer base.

Just like higher taxes and reduced government spending (austerity) can provoke consumers to spend less (simple opportunity cost of what to do with diminishing available capital), more inflation in an environment characterized by a weak labor market and low wage growth could cripple consumption and drive the Euro-Zone back into recession.

This past week, two developments along this front arose: updated inflation expectations from the ECB remain firm towards +1.7% to +2.0% over the medium-term; and the 4Q’13 GDP report was better than expected at +0.5% y/y versus +0.4% y/y expected. The 3Q’13 GDP figure was also revised higher to -0.3% y/y from -0.4% y/y. In support of the ‘a stronger Euro is helping’ argument, consider that on an equal-weighted basis versus the Australian Dollar, the British Pound, the Japanese Yen, and the US Dollar, the Euro gained +1.12% in the 3Q; growth accelerated in the 4Q when the Euro basket gained +4.01%.

In February, the Euro’s gains have been limited to against the Japanese Yen and US Dollar, by +1.28% and +1.51% respectively. Realistically, the Euro might need a spark to help it gain traction elsewhere. This is not purely the result of weak data on the Euro front (the Citi Economic Surprise Index increased to 15.0 on Friday from 9.2 of the prior week); but rather sincere improvement in other currencies.

We maintain that a BoE-styled Funding for Lending Scheme (FLS) has become a more appealing outcome, and it could address credit concerns without putting the Euro at risk of a massive ECB balance sheet expansion that another LTRO or a Fed-styled QE would bring. We remain optimistic on the Euro, especially as extreme US Dollar positioning builds. –CV