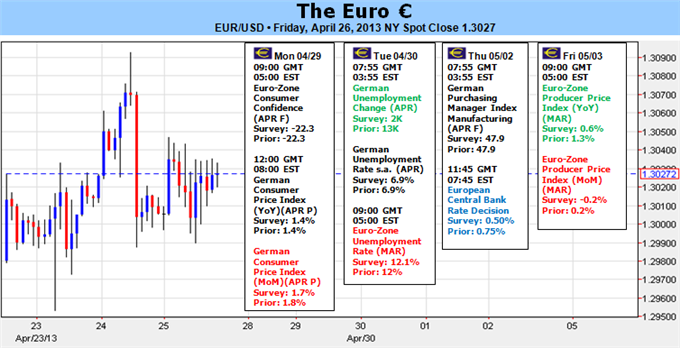 There is a laundry list of fundamental landmines for euro traders to watch moving forward – and that means volatility and even trend development should be expected for EURUSD and other crosses. In the past week, the Euro-region has generated more than its fair share of unflattering headlines – Italy’s struggle to form a government, Spain downgrading growth, Germany showing signs of sympathy pains. Yet, market participations have grown numb to vague threats to regional stability. What is needed to give the shared currency drive are definitive developments that legitimately alter the outlook for risk and return when investing in the euro-based assets.

When laying out the scenarios for what lies ahead, there is one particular event on the docket that should have traders’ attention: the European Central Bank (ECB) rate decision. Recently, we haven’t expected much from the central bank as they have maintained their stoic poise and consistently announced a hold on both the benchmark lending rate (at 0.75 percent) as well as the extra-ordinary support systems (maintaining the threat of activating the Outright Monetary Transaction – or OMT – program). Yet the group’s passive policy bearing could be shattered this week – at least economists think so.

While many Eurozone member economies have reported severe recessions and soaring unemployment, the malaise has done little to sway monetary policy officials to sympathy with additional stimulus measures. Assumptions seem to be changing, however, with this past week’s headlines dominated by speculation that the ECB will finally break after Germany’s economic strength showed signs of softening in PMI figures (considered timely stand-ins for official GDP readings). In turn, bank-based economists have been casting votes predicting a rate cut. In fact, Bloomberg’s consensus amongst economists shows 60 percent believe a 25 basis point (bp) cut to 0.50 percent is on the agenda. Ultimately though, how market moving this event proves depends on the degree of expectation amongst speculators.

If were running off of financial headlines, it would seem that the market is positioning for the risk of an impending cut to the benchmark lending rate. That said, we find little of that dovishness / bearishness priced in to swaps or the Euro’s bearings this past week. From short-term rates, we can back out zero probability of a rate move (though this may be warped by already-extreme low market yields); and EURUSD has stubbornly held to the 1.3000 level. Normally, when we head into an event and expectations are comprehensive; we find the currency will move ahead of time and temper the ultimate reaction to the actual outcome – the basis for the ‘buy the rumor, sell the news’ adage. Yet, if the market doesn’t move to better accommodate that negative outcome, the reaction could prove violent.

Fundamentally speaking, a rate cut would do little to fix the deeper issues plaguing the Eurozone (easing when the benchmark is near zero offers only marginal return); but it would significantly reduce the perceived yield advantage the euro has. Market rates for the region are extremely low – due to programs like LTRO – but the a benchmark rate higher than its US counterpart gives the currency gives the impression that it would lead a rally with higher return during an eventual recovery. What this means for traders is a possibly violent but short-term selling pressure. The lasting bearish outcome and economic support would be the introduction of an expansive stimulus program like the Fed or BoJ programs, but the ECB is already locked into the OMT.

The ECB policy decision will come on Thursday, but there is plenty of event risk to be concerned with before then. Of particular concern are the two members most at-risk of eventually leaving the Eurozone one day: Cyprus and Greece. The former’s parliament will hold a vote on Tuesday whether they want to accept the bailout form the EU and the harsh conditions that accompany it. Under similar circumstances, the EU is scheduled to decide Monday whether Greece will receive its next tranche of aid, but first the country needs to pass another round of austerity. Amongst other concerns to keep an eye on, Spain’s 1Q GDP reading is due. After the Bank of Spain’s painful assessment and the government’s downgrade of growth and ballooned budget deficit forecasts, the situation seems bleak. Also, Italy is still without an effective government, but for the first time since the February vote, a viable solution may be at hand. –JK