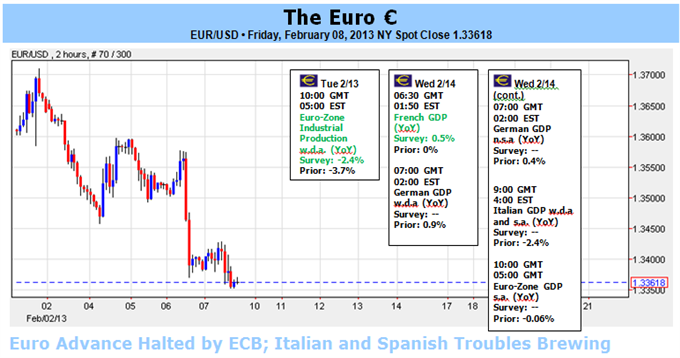 The Euro took a big hit after the European Central Bank meeting on Thursday, sending it down across the board, and placing it last among the majors for the first full week of February. Against whom did the Euro depreciate the most against? – Surprisingly, the British Pound, losing -2.76% since the first day of the month, while dropping -2.16% against the Japanese Yen. These are important distinctions; the Sterling and the Yen are the two worst performing currencies this year, even after this week’s performance, which put them at the top of the leaderboard. Needless to say, the Euro was very weak.

Perhaps the most profound weakness the Euro saw, however, was against the US Dollar; it fell from $1.3710 last Friday to as low as $1.3353 this week, its lowest level since January 25, when it traded as low as $1.3350. This is important for two reasons. First, the Federal Reserve remains in full-on ultra-dovish policy mode, still on pace to add $1.02 trillion to its balance sheet this year. This first point feeds into the second point: when the currency whose central bank is contracting its balance sheet is falling this rapidly over a five-day period against currencies – the US Dollar and the Yen – whose central banks are moving in the opposite direction, it means that there are substantial shifts occurring. While the shrinking ECB balance sheet portends to further strength in the Euro, we must take a neutral bias once again given these shifts.

What are the shifts occurring? There is one economic, another political. Data out of Germany, as well as the broader Euro-zone, showed that economic activity is contracting amid a further decline in the health of the Euro-zone consumer. German Factory Orders slid by more than forecast in December; Euro-zone Retail Sales tanked in December; demand for 91-day ESM bonds was softer than expected; and inflation remains stubbornly low (though this is related to the weakness of the Euro-zone consumer, as aggregate demand remains tepid at best, as well as the strength of the Euro, which preserves purchasing power). Primarily, these soft economic conditions are what ECB President Mario Draghi emphasized in his press conference on Thursday, which led to the Euro’s slide into the end of the week. Many peripheral and second-tier countries have complained publicly – most notably France – that the Euro’s high exchange rate is hurting export growth. But the fact of the matter is that these countries were struggling in in early- and mid-2012, when the EURUSD was trading as low as 1.2041; it is a convenient fallback for politicians to complain it is the exchange rate’s fault, not the policies in place, for the reason growth remains low. While ECB President Draghi said that the central bank does not and will not target a specific exchange rate, his dovish rhetoric, highlighting the conditions that would lead one to believe a rate cut is around the corner, makes it clear that a high Euro is not what the Euro-zone’s economy needs; another shot fired in the race to the fiat currency bottom.

As the ECB tries to impress a near-term dovish outlook on the Euro – more or less balancing out the hawkish outlook it employed at the first meeting of the year – there are dark clouds on the horizon; the eye of the hurricane is beginning to pass, and the next part of the storm is coming. Italian elections are in two weeks, and former Prime Minister Silvio Berlusconi, the architect of Italy’s failed economic policies that brought the country to the brink, is within the polling margin of error. Left-wing front-running P. Luigi Bersani looks even weaker when considering the Monti Pasche derivatives scandal, which has dented technocrat and current Italian Prime Minister Mario Monti’s ‘pristine’ track record. Faith in his constituents – Mr. Bersani – is waning. Add in the fact that Mr. Berlusconi has historically outperformed the pre-election polling results, all of the sudden it appears that the Italian situation may be unraveling under the surface.

Spain is worse, believe it or not. The Rajoy-led government is facing corruption charges. Economically, growth remains weak; higher inflation means Spanish pension funds, which are CPI-weighted, have to pay out more, increasing government spending; and labor market conditions are horrid. If the Spanish government collapses – one which German Chancellor Angela Merkel has tied herself to, by stating this week that she has complete faith in Spanish PM Mariano Rajoy’s policies – we’re looking a potential chain reaction that could destroy the hubris the recent Euro rally been built upon. With few important data releases on the docket this week – 4Q’12 German GDP is the only significant release – we are forced to recognize the big picture, outside of the ECB’s shrinking balance sheet. It may be time to start battening down the hatches. –CV