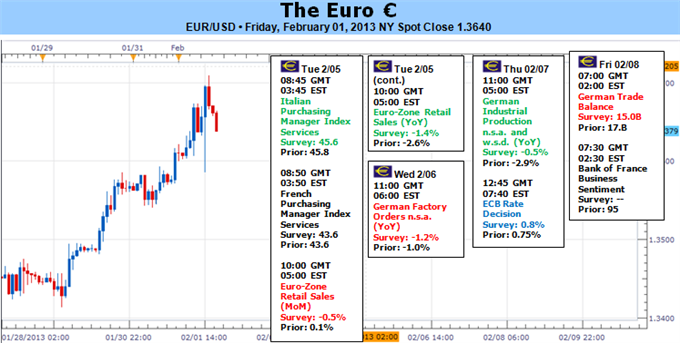 Despite a conspicuous string of disconcerting headlines and economic releases, the euro put in for the best performance amongst the FX benchmarks this past week. While both the 15-month high for EURGBP and nearly three-year high for EURJPY are remarkable, it is still the EURUSD that stands out in the market. The 1.3 percent climb for this most liquid pair easily cleared the 1.3500 level that stood as the mid-point of the 2011 (high) to 2012 (low) range. After six consecutive months of rally, when will this pair show some exhaustion? That is a determination for fundamentals.

There is a reason that the Euro has been able to ignore pressing issues like expectations of a 2013 recession for the regional economy, lingering fiscal risks in Spain (amongst others) and troubled liquidity health. All of those issues have become almost normal in the past three years as the markets have reacted to crisis and then to policy officials’ efforts to forestall crisis. What is novel – especially given the escalation of the so-called ‘currency war’ – is the European Central Bank’s (ECB) unusual reduction of its balance sheet.

Increasing stimulus means injecting more currency into the money system and lowering market rates. Though this supports growth and lending, it also diminishes a currency’s return potential. And, on that point, we know that the Federal Reserve is adding $85 billion per month in stimulus while the Bank of Japan has vowed 13-trillion-yen (roughly €100 billion) moves come the beginning of 2014. In contrast, the ECB has maintained only a threat of buying a potentially unlimited amount of government debt through the Outright Monetary Transactions (OMT) program should vague conditions be met.

That relative position alone may have kept EURUSD and other euro crosses steady, but we have seen the shared currency surge because that steady policy has turned into a tightening one after the Long-Term Refinancing Operation (LTRO) early repayment threshold was met. Last week, European banks paid back more than €137 billion of the more than €1 trillion they took in liquidity assistance starting in December 2011. Such a big reduction runs the risk of putting the European banking system into a dangerous position should global investor confidence fade, but the €3.5 billion pledged repayment in the coming week speaks to a more restrained pace that helps avoid disaster.

There is no driver that is currently more influential for the FX market now than balance sheet adjustment and the impact it has on both speculative interests and yields. With other global counterparts looking to flood the markets, confidence is bolstered. While in Europe, an easing policy boosts rates and attracts that cheap capital generated within its trade partners. But there are risks that the euro faces.

Without doubt, the most prominent and omnipresent risk to the EURUSD’s run (as it is to equity indexes, speculative commodities, high-yield bond funds and Treasury yields) is risk appetite. It is the belief that risk has been drained from the global financial system as much as the Eurozone that is reversing the flow of capital that had previously fled the impending doom so many had fears. It has also made the anemic yields the region has to offer acceptable. Yet, that oblivious yield search can easily come crashing down and bring the euro with it.

A swing in risk appetite is the most immediate and ever-present threat to a sustained euro advance. The second most urgent threat – though it carries a lower probability of occurring – is the ECB rate decision. With Eurozone inflation cooling to 2.0 percent and the economy heading into another year of recession, the ECB may respond to the ill-advised liquidity drain in LTRO with further easing that offset austerity efforts. A rate cut (or sign of future rate cut) would a sharp, but not lasting impact. An active stimulus program would last.

And, finally, the third factor that could pull the Euro down moving forward is a revived appreciation (fear) of the region’s financial and economic troubles moving forward. On that front, we have seen plenty of headwinds, but so far little corresponding fear. - JK