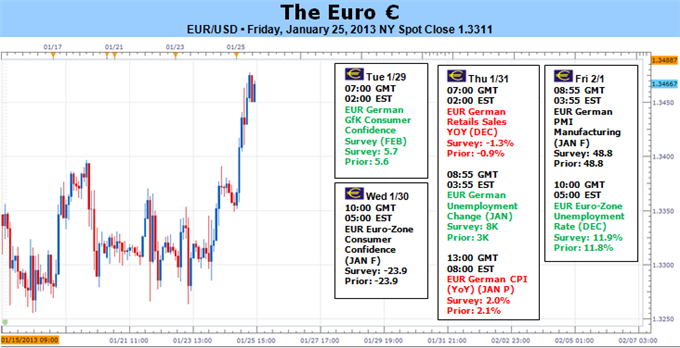 The Euro finished the week at fresh 10-month highs versus the US Dollar (ticker: USDOLLAR) as the US S&P 500 and broader risky assets surged, and current momentum suggests the Euro could test 2012 peaks near $1.35 in the days ahead.

A critical week of US and European event risk promises significant volatility for USD pairs, and it will be important to watch whether the Euro can test and hold new highs against the Greenback. The Economic Calendar features heavyweights such as the US Federal Open Market Committee rate decision, German Retail Salesand CPI inflation reports, US Q4 GDP data, and the infamous US Nonfarm Payrolls report due at the end of the trading week.

Recent price moves and sentiment swings leave us plainly in favor of further Euro strength, but top-tier economic developments could test investor nerves as the S&P 500 and Dow Jones trade at fresh 5-year highs. Steady improvements in US economic data will put special focus on the upcoming US FOMC Rate Decision. Officials will almost certainly leave interest rates and monetary policy unchanged, but any references to improved economic outlook could affect expectations for the future of the FOMC’s open-ended Quantitative Easing.

Next on the ledger will be German Retail Sales and CPI inflation results—both forecast to have declined sharply on a month-over-month basis. Europe’s largest economy likely saw consumer prices fall by their most in 12 months in January, and annual inflation rates will fall to European Central Bank targets at 2.0 percent. Muted price pressures will give the ECB plenty of room to ease policy further through the foreseeable future and may affect European interest rate expectations accordingly.

The ECB recently came into focus as it said regional banks expected to repay a substantial €137.2 billion in Long Term Refinancing Operations (LTRO) funding next week—far above “whisper” numbers and a sign that the banking sector is on better footing than previously believed. A material improvement in regional sovereign debt markets helps explain much of the Euro’s gains against the safe-haven US Dollar; the spread between Spanish and German 10-year bond yields is near its lowest since Q1,2012. Yet markets are fickle, and the first sign of danger could conceivably derail the improvements.

Given stock markets at five-year highs, any negative surprises in end-of-week US Nonfarm Payrolls data could have a particularly pronounced effect on risky asset classes. Recent Initial Jobless Claims data showed that fresh requests for unemployment insurance recently fell to 4-year lows, and analysts predict that the economy added a further 160k jobs in January. We believe that a weaker-than-expected result could actually hurt the EURUSD as the S&P reacts to the disappointment. Of course, only time will tell whether labor market data or any other economic news release can derail seemingly unstoppable share prices. Given strong S&P 500 correlations to the EURUSD, the Euro might actually decline on a weaker-than-expected Nonfarm Payrolls release.

It is shaping up to be an important week for the Euro and broader forex markets, and forex seasonal tendencies show that important reversals are more likely at the beginning and end of each month. Will February finally bring the US Dollar and equity market reversal many have expected? Recent CFTC Commitment of Traders data shows large speculators are now net-long EURUSD futures for the second week in a row. It seems that many are betting on further Euro gains, which is in itself bullish for the EURUSD. Yet time will tell whether the impressive uptrend will come to an end on a critical week for global economic event risk. - DR