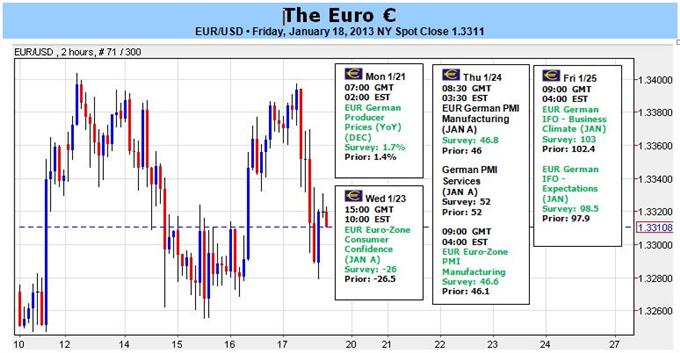 The Euro finished the week effectively unchanged against the US Dollar (ticker: USDOLLAR), but two tests of the psychologically significant $1.34 mark suggest traders are ready and raring to force a break higher.

A relatively limited week of economic event risk didn’t stop the Euro from rallying to its highest in 11 months, and our automated trading strategies bought the EURUSD as sentiment favored further gains. Whether or not the Euro manages another test and perhaps break of $1.34 may depend on results of upcoming German ZEW Economic Sentiment and German Ifo Business Climate survey data. An upcoming European Finance Minister meeting in Brussels likewise offers potential event risk.

A marked improvement in European bond markets shows that regional tensions have calmed into 2013, and a strong Spanish bond auction helped fuel the recent Euro rally. There will be no major government bond auctions in the week ahead, but a Euro-Area Finance Ministers meeting could produce further developments on talk for a so-called banking union.

Many finance ministers believe that central supervision of the European banking sector remains necessary for single currency zone stability. Yet prominent eurosceptics remain vocal in opposition to such changes. A central authority might eventually have the ability to bail out individual European banks—a task that controversially fell to governments already saddled with significant debt. Real action seems unlikely in the week ahead, but we can’t rule out any important announcements and will remain on alert.

German economic data will otherwise dominate Euro event risk, and current forecasts point to further recovery in economic sentiment surveys. According to polls conducted by Bloomberg News, economists predict that the German ZEW Economic Sentiment and German IFO Business Climate results improved to multi-month peaks. The fact that the German DAX trades at multi-year highs undoubtedly boosts optimism, but it will be important to watch for continued progress in order to justify aggressive stock market gains.

Broader financial markets have begun showing clear signs of investor complacency, and the safe-haven US Dollar trades at important lows versus the Euro and across the board.

The US S&P 500 Volatility Index (VIX) finished the week at its lowest levels since the summer of 2007 when the S&P was trading near all-time highs. The so-called “Fear Index” represents the prices that investors are willing to pay for options on stocks in the index. If the VIX is high, it signals that traders are likely paying significant premiums for protection against stock market losses. If the VIX is low, investors show very little fear that equities turn lower.

The US Dollar seems unlikely to recover versus the Euro or any other risk-friendly counterpart amidst such levels of financial market complacency. Yet it’s interesting to note that forex options markets show fear of stronger currency movements going forward. Our DailyFX 1-month Volatility Index has bounced considerably off of recent multi-year lows. Such price action suggests we may continue to see Euro/US Dollar volatility into the weeks ahead. – DR