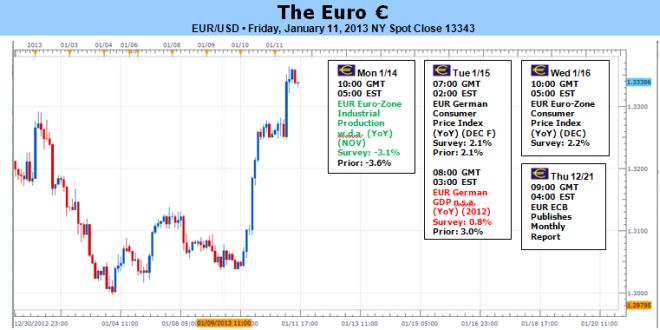 After a rough start to the week that had the Euro eying exchanges rates below 1.3000 versus the US Dollar, the common currency turned around rapidly after a decidedly more positive European Central Bank policy meeting on Thursday. Citing hopes for growth in the second half of the year as well as reduced downside risks and diminished tail risks, ECB President Mario Draghi gave perhaps the most poignant defense of the central bank’s policy and its role in staving off a financial crisis that threatened the region’s very existence. No need to look further than the results of the Spanish bond auction on Thursday: the 10-year bond yield dropped below 5.000%.

With a new boost of confidence from the ECB, the Euro was able to outperform the rest of the majors by Friday as the best performer for the second week of January. The Euro gained +3.18% against the Japanese Yen; +2.08% against the US Dollar; and even +0.81% against the Swiss Franc (the EURCHF briefly traded to 1.2200 on Friday). With momentum solidly behind it, of course due to the ECB’s bold (or hubris) statements that the crisis has morphed from a “financial” to an “economic-growth” one, as well as a strong set of data due the coming week, the Euro could easily continue its turnaround from the beginning of the year. For these reasons, we have upgraded our forecast for the Euro to “bullish.”

Outside of the ECB policy meeting and the Spanish bond auction this week, the few impactful data releases were mostly disappointing, in sharp contrast to the growth picture the ECB described at their policy meeting. At the factory gate, price pressures fell in November, with the Euro-zone Producer Price Index dropping to +2.1% y/y from +2.6% y/y, below an expectation of +2.4% y/y. November Euro-zone Retail Sales contracted by more than expected, coming in at -2.6% y/y from -3.2% y/y, below an expectation of -2.1% y/y. When considering these data in context of the weak November German Factory Orders, it’s evident that aggregate demand is falling in the Euro-zone; these are all signs of weaker consumption.

Yet as long as the Euro stays disconnected from reality (trading on the excitement of the ECB’s shift in perspective rather than the actual economics), this week offers an opportunity to look higher. If anything, actually, the data due this week supports the ECB’s notion of growth prospects slowly turning the corner.

On Monday, the November Euro-zone Industrial Production report is due, and should show that production improved to -3.1% y/y from -3.6% y/y in October. On Wednesday, the December Euro-zone Consumer Price Index reading should show signs of reemerging inflation, with the monthly reading coming in at +0.3% m/m from -0.2% m/m, and the yearly Core reading coming in at +1.5% y/y from +1.4% y/y. The only poor data due that could weigh on the Euro is the 2012 German GDP reading, forecasted at +0.8% from +3.0%, which comes out on Tuesday.

Overall, we expect that, barring a breakdown in risk-appetite outside of Europe, the Euro looks well-supported going into the next week. Of course, we’re witnessing a positive sentiment extreme right now, with Italian and Spanish bond yields at their lowest levels over the past 12 to 18 months. Accordingly, these remain the benchmarks to watch for underlying Euro weakness; as long as yields remain low look higher, especially versus the Japanese Yen, while even outperformance against the commodity currencies could occur. –CV