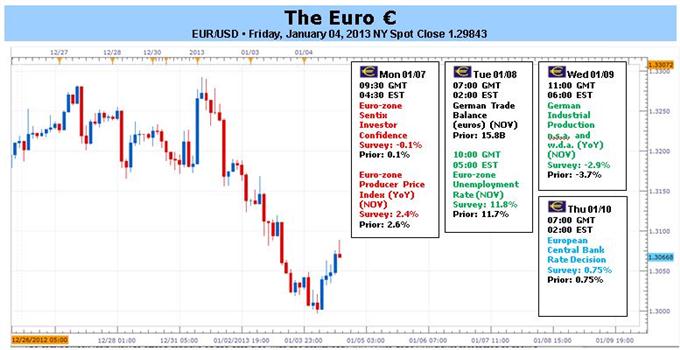 - Staying Short EUR/AUD After Trading into a Near-term Top

The Euro was one of the worst performing currencies this past week, losing ground to all the majors but for the Japanese Yen, an unremarkable feat by any stretch of the imagination. Commodity currencies were particularly strong against the Euro this past week, with the Euro losing -2.59% to the top New Zealand Dollar, -2.17% to the Australian Dollar, and -2.13% to the Canadian Dollar. Largely, this was due to the relief the US fiscal cliff being avoided, allowing investors breathing room to take on more risk; naturally, the higher yielding currencies were desired.

But with so many issues that plagued the Euro and risk-appetite in general during the middle of 2012 seemingly like a distant memory, is the Euro set to resume its rally? Possibly, but not this week; we hold a “bearish” bias ahead of the European Central Bank meeting on Thursday for two crucial reasons.

First, the Euro itself: as per the CFTC’s Commitment of Traders report for the week ending January first, futures positioning showed that traders had unwound the short EURUSD positioning; net-longs totaled 5126, while net-shorts totaled 2549. Put another way, the short trade is no longer crowded. This is important when considered in context of the Federal Reserve’s December meeting Minutes, which showed some divergence in opinion among Fed Governors as to when QE3 ($85B/month in agency MBS purchases and outright Treasury purchases) would end; this has boosted appeal for the US Dollar, as confirmed by the rise in both the Dow Jones FXCM Dollar Index (Ticker: USDOLLAR) and US Treasury yields. While the Fed’s QE3 program will not end anytime soon, perception is often reality, and the chatter alone about QE3 ending ahead of previous expectations has tilted near-term positivity in favor of the US Dollar, not the Euro. There is sufficient fundamental reason to believe the EURUSD could decline over the coming weeks given this perspective.

Finally, when looking at the rest of the data picture, there’s little reason to be optimistic – the major data releases are expected to show deflation (Euro-zone Producer Price Index (NOV) on Monday) and a worsening labor market (Euro-zone Unemployment Rate (NOV) on Tuesday). Fundamentally, Euro optimism may be exhausted, and this week, like the second week of January 2012, could produce further downside price action. –CV