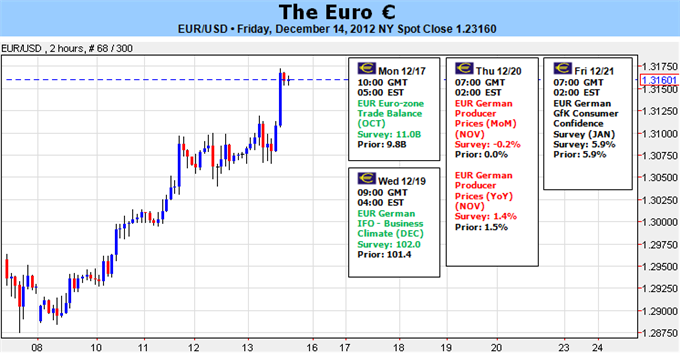 The euro’s strength was robust and broadly distributed this past week. A combination of general (though modest) improvement in economic data, the loose adoption of an EU bank supervisor and the long-awaited approval for Greece’s aid distribution generated enough optimism to lift the currency against all of its counterparts. It’s performance ranged between the barely changed EURCHF (laden by regional capital flows) and the impressive 3.0 percent surge from EURJPY (helped out by an exceptionally weak yen). Helped along by a positive bearing on global investor sentiment, the Euro has leverage fundamentals to remarkable effect. Yet after the aggressive rally to multi-month and multi-year highs, we find that the burden for follow through has risen substantially – just we’ve run out of big-ticket catalysts.

It has taken a tremendous amount of lift to drive the euro to the heights that it scaled last week. Most prominent is the EURUSD which has risen to test the highs set in March along with the 38.2 percent Fibonacci retracement of its 2011-to-2012 bear trend at 1.3150. While the benchmark pair has officially marked its highest intraday level and daily close in over seven months, it hasn’t fully cleared the next stage to extend its bull run into a systemic trend. This technical view is a fitting reflection of the fundamental and market conditions that the FX market faces moving forward.

To assess our next move, we should first appreciate what it took to wrench the euro to the heights it currently finds itself at. There were a series of economic releases this past week that could at best be described as ‘better-than-expected’. The bulk of the currency’s move was founded on relief. The risk that Greece could either default or exit the Eurozone (or both) tapped into an elemental fear of over the inviolability of the economic collective and its currency. Slowly, however, that threat has abated. The shift began back in July after an EU Summit laid out programs to support struggling members. When the ECB announced a potentially unlimited safety net in its OMT program, the pressure on the euro further eased. This past week, the approval of Greece’s next round of aid was the next step. After an initial short-fall on the bond buyback program, the market saw that the country would meet the target necessary to trigger support as the week wore on. By Thursday, the EU announced an immediate dispersal of €34.3 billion and monthly payouts afterwards.

Delivering aid to Greece removes the euro out of immediate peril, but it is interesting to note that the currency barely advanced after the news. The market had priced in this outcome well before hand as the alternative would have been politically unpalatable. Yet, now we have found the relief the market had priced in before hand and bought Greece a number of months of calm before another serious shock could show up. Risk has been removed. Shouldn’t the euro be wide open to rally now? Not necessarily. While Greece may no longer be an immediate threat, there really isn’t a convincing argument of strength to be made for bidding the euro. What we have seen from July was in essence a series of relief rallies spurred on by the anticipation of and reaction to stabilizing policy. And, we have run out of catalysts…

In trader parlance, we have ‘reduced the tail risk’ – or as policy officials say, “there is no longer a crisis of confidence in the euro’. Yet, that isn’t a standalone reason to be bullish. Investors are not naïve enough to believe that this one approval will secure Greece or the Eurozone for good. What’s more, neglected concerns may start to come back to the forefront. Spain’s funding issues are national, regional and banking sector-wide; and there has been little genuine progress made beyond a fortunate easing of bond yields. An election in Italy highlights the country’s debt load. Ireland will release 3Q GDP next week to remind us of the underlying economic issues are. And, perhaps most concerning of all, Portugal has built up a call for ‘equal treatment’ – access to the ‘one-off’ same accommodation as Greece.

These are all medium-term concerns, but the euro’s bearings the coming week are more likely to defer to the shorter-term issues. Volume and participation are fading into the end of the year and the risk appetite run will lose steam. The euro is amongst the most stretched…–JK