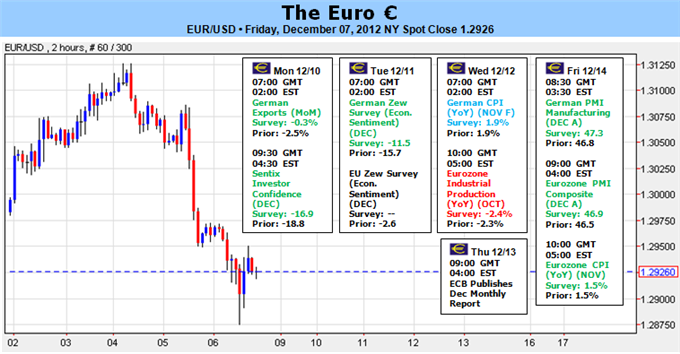 The Euro was one of the worst performing currencies this week, losing -0.46% to the US Dollar and -1.93% to the top New Zealand Dollar, as an interesting mix of data and commentary from central bankers and politicians allowed for an odd week of trading, with weakness in equity market and European peripheral bonds (rising yields), while strength in high beta currencies such as the Australian and New Zealand Dollars.

The Euro was looking strong in the early part of the week, rising back above 1.3100 against the US Dollar as progress on the US fiscal cliff/slope soothed near-term investors’ anxiety. But by mid-week, the Euro’s fortunes were very much changed. With an inconclusive docket for the coming week, with a decision on Greece’s aid tranche on Thursday, with Spain beginning to flirt with a bailout request, and with the European Central Bank’s policy meeting results all likely to influence the 17-nation single currency, we must maintain a “neutral” bias on the Euro.

To review: Spain has officially requested bailout funds for its banking sector. There were also rumors that Spain would seek a full sovereign bailout if the ECB would be willing to keep its longer-term yields within 2% of Germany’s. Obviously, this would not happen; ECB President Mario Draghi said on Thursday that the market has to find its own “natural” rates within reason; this in and of itself is a direct refutation of the Spanish request. This means that not only is the ECB on hold (no further rate cuts), but nothing else will be done until Spain takes the ECB’s conditions; the tail will not wag the dog.

The region could use looser monetary conditions, with Germany starting to see weaker growth; yet any additional measures will likely result in higher inflation in the core countries as well as sovereign moral hazard. We don’t see a rate change at present time, even though Bloomberg News reported that most ECB policymakers favored a 25-bps rate cut on Thursday.

Additionally, the European Union will deliver its final decision on the Greek aid tranche this Thursday, at which we expect a full dispersion to take place, or a planned release of funds in the future. Primarily, it is highly unlikely German Chancellor Angela Merkel allows Greece to leave the Euro-zone and allow a failure on her record (the beginning of the break-up of the Euro-zone) ahead of elections in just a few months. It would be very surprising if Greece does not receive the aid.

The data picture the coming week is neutral to bullish for the Euro, which could help some of these other negative pressures present. On Monday, the December Euro-zone Sentix Investor Confidence reading is expected to have increased to -16.9 from -18.8. On Tuesday, the German ZEW Survey will show improvement in both the Current Situation and Economic Sentiment readings, which should ease 4Q’12 concerns about German growth.

The Euro-zone Consumer Price Index this Friday draws our attention. Inflation is expected at -0.2% m/m in November, down from the +0.2% m/m reading in October. The yearly figure is expected at +2.2% from +2.5% y/y previously. These figures suggest aggregate demand in the Euro-zone is falling, a view shared by the ECB on Thursday. If deflation takes hold, a rate cut becomes a very real possibility in 1Q’ or 2Q’12. There are many different factors weighing on the Euro right now; while they’re mostly negative, positive outcomes remain possible. Accordingly, with data poised to offset concerns over Spain and the ECB over the coming week, we must give the Euro a “neutral” rating going forward; when risk-appetite is prevalent, the Euro could trail the winners; and when risk-aversion is prevalent, the Euro could lead the decliners. –CV