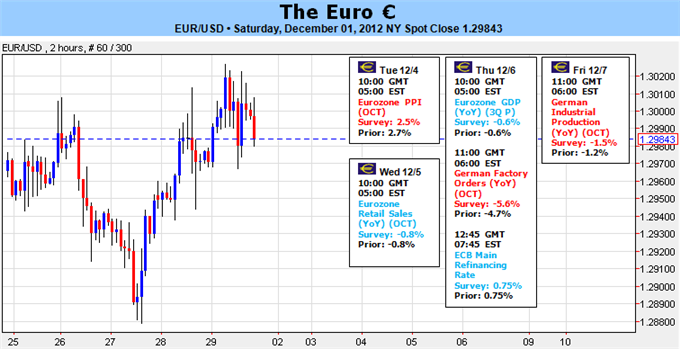 The Euro was the top performer the past week despite only a modest performance, gaining +0.11% against the US Dollar, the second best performer, and gaining +0.59% against the Japanese Yen, the worst performer. Overall, the prevailing drivers of price action were only in part out of the Euro-zone, as there was a lot of hoopla surrounding the Greek aid negotiations coming down to the wire (with a deal ultimately prevailing). Instead, it was a combination of said Euro-zone pressures with US fiscal cliffs/slope concerns, which ultimately set the stage for a move away from high beta currencies and the safe havens alike, allowing the Euro room to move higher. Nevertheless, our assessment cannot be upgraded beyond “neutral” for the coming week.

First, on Greece: After nearly three years after the crisis started, it is starting to look like debt forgiveness for Greece may be the only answer. Greece received its third bailout package, this one for €44 billion, which will be distributed through the end of March 2013. Even the European Central Bank suggested it could allow Greece access to its lending facilities once more (similar to how the ECB has the OMTs in place for Italy and Spain). In the big picture, it’s unlikely that we get through another round of debt negotiations without serious efforts from the Greek government – and that would likely result in more elections. This is hardly the last time that Greece takes center stage.

While Greece is a neutral factor, the economics of the Euro-zone remain very much in question. This past week, Spanish inflation data showed increasing price pressures, forcing the government to raid reserve funds to cover the funding gap (as opposed to higher taxes or spending cuts elsewhere), which will likely create more political division in Spain. Elsewhere, the Euro-zone Unemployment Rate for October hit a new all-time high at 11.7%, while the preliminary Italian Unemployment Rate for October jumped to 11.1%.

The coming week isn’t likely to offer a reprieve on the data side, with the preliminary 3Q’12 Euro-zone GDP figure forecasted to show a slight contraction of -0.1% quarter-over-quarter, the same as 2Q’12, while on a yearly-basis, growth fell by -0.6% again. Furthermore, given recent inflation data across the Euro-zone (from Germany to Spain), it’s clear that another rate cut is unlikely to happen anytime soon, so the ECB meeting on Thursday is unlikely to provide much of an uptick higher, with President Mario Draghi expected to extend the usual ‘we stand ready to act’ that we’ve become so accustomed to these past few meetings. The 12-month rate forecast suggested by the Credit Suisse Overnight Index Swaps is only -1.4-basis points, confirming this expectation.

Perhaps the best then for the Euro to see outperformance heading into December would be continued concerns over the fiscal cliff/slope; after all, the EUR/USD is comprised of two components. Now that European leaders have built a seemingly sturdy plan, one that should last until March 2013 at least, the focus is on US policymakers and their inaction. Thus, near-term political pressure has swung from a bearish force to a bullish force, on a relative basis.

There are some outstanding issues that need to be resolved – will Spain seek an international bailout – that could provide some support to the market. In sum, these multiple contradicting signals offer little clarity, forcing us to maintain a “neutral” bias for the week ahead. –CV