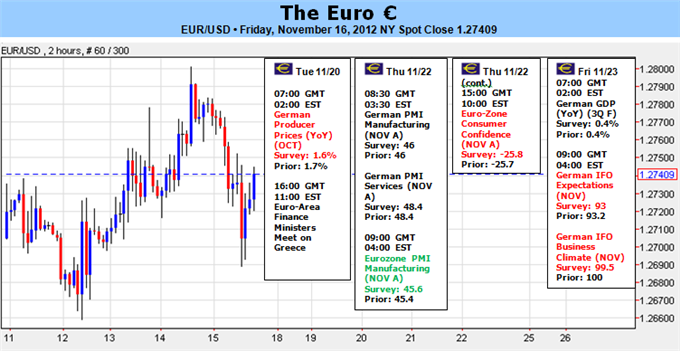 Risk trends clearly struggled this past week. Though the underlying fundamental measures of speculative appetite were slow to follow, the benchmark US equity indexes (representing both investor sentiment and a bullish bias padded by Fed stimulus) reflected a dramatic decline in trader confidence. In this ‘risk off’ environment, we would expect one of the world’s most fundamentally-troubled currencies – the Euro – to be under tremendous pressure. In fact, where the S&P 500 has dropped another 1.5 percent this past week; the Euro has actually advanced against all of its counterparts (except for the Swiss franc). The definition of a strong currency is one that leverages its progress on bullish news and curbs the effect of negative developments. Is that what we are seeing here – a currency ready to rally on good news?

The backdrop for market conditions these past few weeks has proven quite unique, and particular circumstances going forward will only add another layer of complexity moving forward. However, before we delve into the outside conditions; we should first discuss the individual bearing and performance of the euro itself.

Through the opening weeks of September, the shared currency leveraged an exceptional rebound - best read in the EURCHF’s long-overdue advance from its artificially-imposed 1.2000 floor. That strength developed out of the backstop bond purchasing program from the ECB (the OMT effort announced the previous month) and belief that crises in Spain and Greece would not worsen materially. However, that optimism has since deflated as the squabble over paying Greece’s €31.5 billion aid tranche has been drawn out and Prime Minister Rajoy still refuses to ask for an official bailout despite the multi-faceted problems his economy and financial system faces.

Yet, recently, we have seen glimmers of hope filter through the euro’s otherwise murky future. This past few weeks, Greece secured a two-year extension to meeting its deficit targets and it was able to raise €5 billion to roll over a short-term bill that came due. The true litmus test for the country and euro’s near-term health comes early this upcoming week. On Tuesday, the Eurozone Finance Ministers are scheduled to meet specifically on Greece. Italy’s Finance Minister (amongst a few others) has voiced his confidence that the region’s most troubled member will finally secure financial aid at this meeting. If officials finally approve a payment to the country, it could immediately deflate the region’s greatest fundamental threat. On the other hand, considering the market is currently leading a favorable outcome, a disappointment could shed all hesitation in unloading the euro and the region’s speculative assets.

The level of concern surrounding Spain’s financial progress / decline will correlate directly with the confidence in Greece. If traders read the events pertaining to the latter’s financial aid poorly, Spain’s refusal to tap support will be judged an explicit risk to the broader region. Spain has two bond auctions, a redemption and the release of the Bank of Spain’s bad loan data on tap. All noteworthy, but the real concern will always be when (not ‘if’ as the market already expects it) the Eurozone’s fourth largest economy will tap the rescue program.

Another critical aspect to the direction and momentum behind the euro is the general state of market conditions over the coming week. This currency has come off as exceptionally strong this past week as it has fended off a dollar climb and equities plunge. This stand out strength has a caveat to it. In fact, risk trends have not fully engaged – best seen in the Risk-Reward Index and lack of progress on the volatility indexes (measures of market fear). If risk trends were to find fully commitment from all asset classes, it would sink the euro.

Given the general trend behind the capital markets these past weeks, a sustained – and potentially escalated – risk aversion move seems a strong probability. However, there is a disruption that we must account for: the US holiday. Thanksgiving may not be recognized in the Euro-area, but the historical drain on speculative activity is. A curb on risk aversion can actually lead to a mild ‘risk on’ correction. – JK