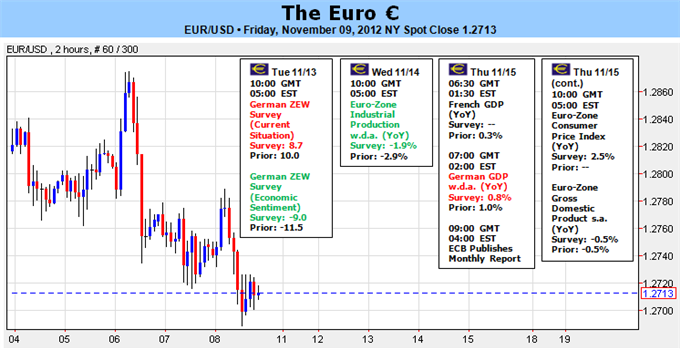 The Euro had another weak week, losing ground against all of the major currencies but for the New Zealand Dollar, which it gained +0.32% against. The single currency lost -2.15% against the top performer, the Japanese Yen, and lost -0.97% against the US Dollar, which remains elevated despite the beginnings of the Federal Reserve’s QE3 program, unlimited open-ended agency mortgage-backed securities (MBS) purchases at a clip of $40 billion per month. Thus, perhaps what we might begin to see – especially if the US Dollar is being diluted by the Fed – is that the Euro trades more heavily against the commodity currencies, doubly possible given the recent uptick in Chinese data.

With another weak performance over the past five days behind the Euro, it’s important to reflect on the path traveled. In terms of data, Italian and French manufacturing data turned lower over the past months, and the German growth forecast for the coming year was revised lower as well – both clear signs the crisis is having real impacts on the relative core. Even at the European Central Bank press conference following their Rate Decision on Thursday, President Mario Draghi said that the “risks surrounding the economic outlook remain on the downside.” Furthermore, with the medium-term interest rate forecast above the 2% year-over-year target, any growth boost via another rate cut looks unlikely.

This theme of economic weakness will continue to be a driving factor for the week, and is a main reason why the Euro’s outlook is neutral-to-bearish. We look to Thursday, when French, German, Italian, and broad Euro-zone growth data is due. On Thursday, the preliminary third quarter French GDP figure will come in at 0.0% on a quarterly-basis, the same rate as the previous quarter, and 0.0% on a yearly-basis, from +0.3% y/y in the second quarter. German growth rates are forecasted to tail off as well, with the quarterly figure shown at +0.1% from +0.3% q/q. On a yearly-basis, growth is projected to have slowed to a rate of +0.4% from +0.5% y/y. Rounding out the Thursday individual growth data are the Italian figures, projected to go to -0.5% q/q from -0.8% q/q and to -2.9% y/y from -2.6% y/y.

As these segregated figures suggest, the growth trend has been weaker, and the Euro-zone GDP figures will reflect this. According to a Bloomberg News survey, the quarterly figure eased to -0.1% from -0.2% q/q, while the yearly figure deteriorated to -0.6% from -0.5% y/y. Additionally, the Euro-zone Consumer Price Index for October released on Thursday will showing easing price pressures, with the headline figure projected to fall from +2.6% y/y to +2.5% y/y, Likewise, the yearly Core CPI reading fell held at +1.5% y/y.

When we overlay these figures together, we get a very clear picture of what austerity is doing to the European consumer: incomes are falling and aggregate demand is thus dropping. A decline in growth with easing price pressures suggests that demand-pull inflation is absent – shrinking economies are shedding workers, who have less money to spend, thus buy fewer goods, forcing companies to shed more workers, etc. At this point, more monetary stimulus might not do anything more than spur cost-push inflation, the kind central bankers, especially at the ECB due to the German stance on inflation, would prefer to keep absent.

With the economic picture so weak, the only real hope for upside in the Euro is an uptick of broader risk sentiment, which is looking less likely now that Democrats and Republicans alike are entrenching themselves in their respective positions as negotiations for the US “fiscal cliff” (thanks Ben Bernanke) begin. Even though it is a US Dollar problem, fiscal cliff-borne tensions will hurt the Euro. Perhaps China will help things; data has been improving and there’s little reason to believe that an outside negative print is on the horizon this week.

But as events throughout the week showed, ultimately, the concerns over Greece and Spain are going to push-and-pull the Euro back and forth this week, with risks biased to the downside. Protests continued throughout Greece and Alexis Tsipras, the recently absent but not forgotten leader of the anti-austerity, and implicitly anti-Euro (given the European Troika’s parameters) Syriza party, called for elections anew. Recent polling figures suggest that the New Democracy-lead coalition would be out of power, with Syriza gaining control of the government, and the far-right Neo-Nazi party obtaining the third-highest contingent of seats. Needless to say, the markets will not like this, just based on the renewed uncertainty that Greece could default on all of its debt; as a reminder, including derivatives, obligations resulting from a Greek default could total over $1 trillion.

Spain represents the clearest path for some positive news out of Europe. I’ve long discussed the possibility of a Spanish bailout, on the premise of worsening economic data and increased international pressure to see resolution with banking sector woes. As the current state of Greece shows, the international aid path – especially one outlined by the European Troika – is harsh and unwelcoming. If Spain gives in, while it will be positive for market participants’ confidence with respect to the ECB coming into the market, it could mean the end of the current government, as already-disgruntled citizens will be convinced the Rajoy government has given away the country’s sovereignty. Any uptick in the Euro based on Spanish bailout news is another ‘buy the rumor, sell the news’ type of event.

This increasingly negative backdrop, despite the potential for the Spanish bailout, leads us to have a neutral-to-bearish bias for the coming week. In the event that Spain does request a bailout, our forecast becomes bullish immediately, and for at least a few days, although it’s hard to foresee strength beyond the very near-term given exogenous influences gaining steam, as noted earlier. –CV