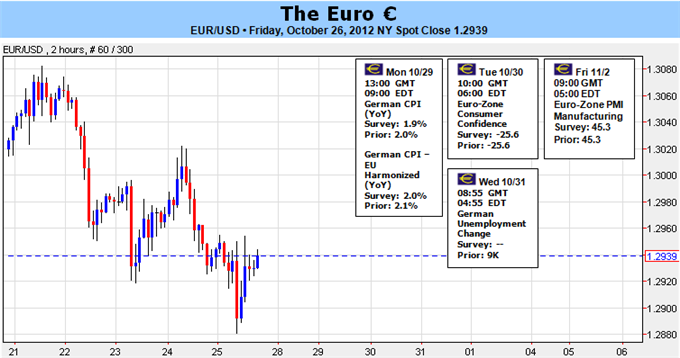 The Euro was roughed up this week, falling against nearly every other major currency, with the EURUSD falling back below 1.3000 amid rising Italian and Spanish bond yields. In fact, the Euro only gained against the heavily manipulated Swiss Franc, only for a mere +0.03%, For the most part, the Euro’s weakness these past five days had very little to do with the sovereign debt crisis itself and more so with the economic data that came across the wires.

But with most of the major data passing this past week – including Euro-zone PMIs and the Spanish third quarter labor market reading – the focus will return to the sovereign debt crisis and what steps will be done to make the next steps forward: when will the European Central Bank formally enter the bond market with its OMT program? And it is due to this relationship dynamic – the negative influence from economic fundamentals and positive influence from stimulus expectations – keeps the Euro at a decidedly neutral point for the coming week. But this is a very fragile neutral outlook: it will only take a little to send the EURUSD to fresh highs above 1.3170/75 (September high); or down to new lows below 1.2800/05 (October low).

The negative influences that are likely to hurt the Euro are two-fold: the economic data picture is weak; and if there are no new developments on the Spanish bailout, the Euro will be further pressured to the downside (more on this below). In terms of the data, there are two main concerns: German inflation data; and Spanish growth data.

On Monday, the preliminary German Consumer Price Index reading for October is due, and should indicate that, despite the ECB’s increasingly loose monetary policy, inflation remained exceptionally stable. In fact, according to a Bloomberg News survey, the monthly reading will come in flat just as it did in September, while the yearly reading should show price pressures of +1.9% from +2.0% y/y in September. The CPI EU Harmonized readings are nearly identical, with the only difference being that the yearly figures are forecasted to move lower from +2.1% to +2.0% y/y. Tempered prices pressures are important to Germany given the country’s cultural and economic stances; and if inflation is capped, then Germany won’t be so concerned about more ECB easing. Thus, the lower the print, the more beneficial it could be.

On Tuesday, the third quarter Spanish Gross Domestic Product reading is due, and like other struggling Euro-zone nations, a greater rate of contraction is forecasted. According to a Bloomberg News survey, the quarterly growth rate held at -0.4%, but the yearly rate dropped from -1.3% to -1.7% y/y. This might be the most important data release of the entire week outside the American labor market reading on Friday. Why? Pressure isn’t that intense on Spanish Prime Minister Mariano Rajoy to seek a bailout: although economic conditions are bad, he’d prefer not to implement any additional unpopular budgetary reforms (austerity, or higher taxes and lower government spending), which would increase social unrest; and bond yields remain significantly lower from their July highs ever since the ECB promised to throw the kitchen sink at the crisis.

Primarily, as briefly touched upon earlier, market participants are waiting for news on the Spanish bailout. With each passing day that it doesn’t come, peripheral yields will slowly creep up, and risk-appetite will be damaged even more. The key will be the Spanish GDP print – anything at or below the estimates will provoke speculation that a bailout request is more and more likely. Essentially, the more negative the better. But given the uncertainty surrounding this week’s impending events (and likely volatility), we are taking a very cautious stance, with significant risks to both the bullish and bearish outcomes. – CV