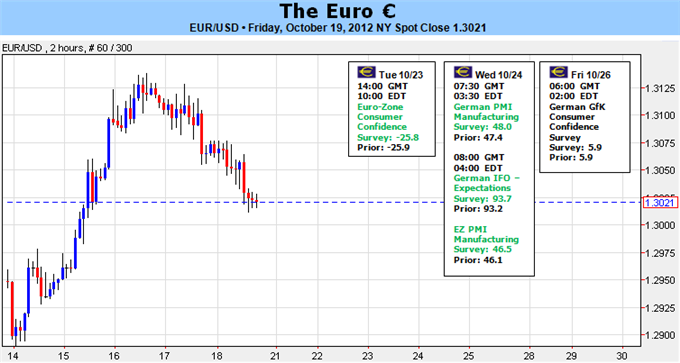 Euro Faces a Move To and Below 1.2800 if Risk Falters after EU Summit

Through the end of this past week, the euro managed to close a bullish performance against all major counterparts with the exception of the Australian dollar. Yet, given the comparison between the first half and second half of the week along with the downturn in fundamental forecasts, it certainly didn’t feel like a favorable week for the currency. Traders’ focus this past period was heavily concentrated on a Euro-area event: EU Summit through the final 48 hour of trade. This helped to distract from disappointing developments in the lead up and dazed the market enough to prevent a dramatic reaction to an unfavorable outcome. Yet with the ‘hope’ element diminished, risk trends back in play and the docket filling out; the coming week will likely shake traders from their stupor and possibly deliver on a major EURUSD breakout and perhaps even trend.

In the hierarchy of fundamental drivers for trading the euro, we must respect the same omnipresent catalyst that most other currencies and assets are destined to follow: risk appetite. For each currency there are two considerations when assessing the risk impact: the intensity of sentiment itself and the asset’s sensitivity to those changes. When risk trends are moving aggressively (whether towards mania or panic), each currency will quickly return to its ‘standard’ position in the spectrum – amplified by volatility and conviction. Where the US dollar defaults to safe haven, the euro’s two-and-a-half year financial crisis has labeled it a ‘risky’ currency (to fall when optimism falls).

We’ve passed through a number of events over the past weeks that could have potentially set off a decisive risk trends (3Q earnings, Chinese GDP, EU Summit, IMF meeting) and none have delivered. Yet, the negative reaction to Google’s reporting last week (drawing stark contrast between malleable bank earnings and everyone else), may have confirmed the doubts for corporate revenue that has built for weeks. That said, Apple’s earnings on Thursday should be monitored closely.

Economic growth will be another, critical topic over the coming week. The definitive measure of that theme will be the advanced reading of US 3Q GDP (as it is the world’s largest economy). However, a Friday release threatens to stall a decisive bearing for general sentiment. Yet, more timely (monthly) growth proxies from China and the Euro Zone (PMI figures) on Wednesday can disrupt any quiet well before we even reach the US data. The best scenario for a serious and lasting risk trend shift would be to see a critical break lower on US equity benchmarks (1425 for the S&P 500 and 13,300 for the Dow Jones Industrial Average) in the first 48 hours. That would set a bias before the data comes into play – a scenario that would likely find positive developments downplayed and the negative amplified.

The euro’s more thematic issues will contribute to the global balance between risk and reward in its own (if passive) way. A lack of progress on Greece and Spain is commonplace at this point, but we are quickly reaching the extent of the market’s tolerance. And, a strong shift in general confidence levels will accelerate that fact. Greece will return to the negotiation table with the Troika moving forward, but the market has priced in their receiving the next tranche of aid at this point. A convincing, euro bullish outcome likely rests with further favorable conditions to its financial position (more time, restructuring or more funds).

Spain may not be as volatile a threat, but its influence is far greater than that of its smaller counterpart. The market expects Spain to ask for a full bailout and thereby tap the OMT program the ECB setup. Yet, those anticipation coupled with the recent swell in sentiment has helped lower Spain’s yields and convinced Rajoy to delay the request. In the end, this will likely look a lot like the previous rescue efforts: refusal to move until forced and generating painful volatility in the process.

When we look at the big picture, we find that risk appetite is elevated on a lack of participation and the Euro-area crisis has not even reached its turning point. Yet, these factors can be downplayed or temporarily overlooked with ongoing distractions. For those looking for short-term volatility in response to event risk: the docket holds Eurozone debt-to-GDP figures for 2011 on Monday, a Spanish bond auction on Tuesday, and the PMI October activity numbers Wednesday. After that wave, we focus on the big picture. – JK