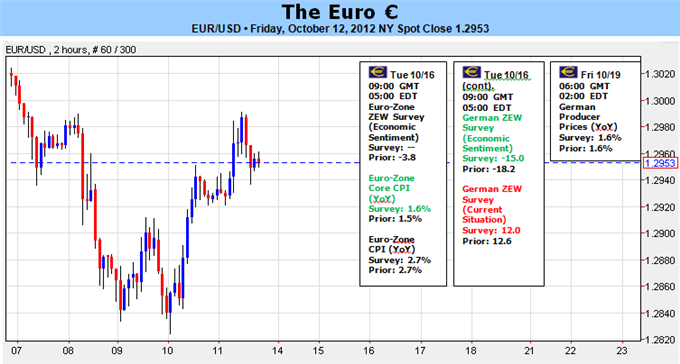 The Euro had a rough week, losing ground against every major currency, and falling by -1.18% against the resilient Australian Dollar. Against the US Dollar, the currency by which it is traded most against as measured by global volumes, the Euro shed -0.70%. In terms of data this past week, there wasn’t that much good or bad anywhere. Mainly, the Euro’s weakness this week had to do with concerns over the Spanish bailout, with the Spanish government denying that it would be seeking one just yet. Furthermore, Standard & Poor’s downgraded Spain to ‘BBB-’ from ‘BBB+.’ No, not ‘junk,’ still investment grade – yes, that escapes me as well given the movement of bond spreads over the past several months before the ECB’s last stand pledge.

But in the coming week, there is something big on the horizon: a Euro-zone Summit this week on Thursday and Friday. And it is very possible that this Euro-zone Summit is different from anyone preceding it: the potential is very much there to make a strong statement about European unity and give the Euro another major shot of confidence in the arm at the end of the week.

The path to the major effort this week began in early-October. On October 2, Reuters reported that Germany signaled to Spain to wait to announce the bailout. “‘The Spanish were a bit hesitant but now they are ready to request aid,’ a senior European source said. Three other senior Eurozone sources confirmed the shift in the Spanish position, all speaking on condition of anonymity because they were not authorized to discuss the matter,” the article stated. A few days later, on October 5, French President Francois Hollande said that while it is Spain’s decision to take a bailout or not, that the issue must be “clarified” by or at the Euro-zone Summit. What does this mean and why is it bullish for the Euro?

If European leaders are smart, this could be the first major step towards political unity. The scenario: Spain, told by Germany to wait until the Euro-zone Summit from October 18 to 19, requests aid at the meeting, having “clarified” their position, as so demanded by the French President. At the meeting, Spanish leaders approach the rest of the Euro-zone’s stewards for funds. The leaders confer, and as a politically united Europe, not just Germany, pledges to aid Spain. The European Stability Mechanism (ESM) is called upon, and the European Central Bank implements its unlimited sterilized bond-buying program to keep yields capped.

This would represent a major shift in the crisis. Europe has a unified political front, to start, backed by the monetary union that already exists. Of course, there will be promises for further economic integration and some sort of banking union down the line. Instead of further efforts by the European Troika, which has seemingly lost credibility following the debacle in Greece, the ECB, as the last credible institution in Europe, whilst leveraging the ESM, is supporting Spain. This is nothing like what happened for Greece, Ireland, or Portugal.

Is this a permanent solution? No, hardly not. But it will be enough to buy more ‘faith’ from the market – just as the ECB’s late-July promise lifted the EURUSD from two-year lows near 1.2000; today, it closed just under 1.3000 after peaking at 1.3170/75 in mid-September. The superficial value of monetary union and political cohesion (Germany does not look like the sole decision maker but one of many voices in the room) at once will be enough to allow a collective sigh of relief for a few weeks, until Spain’s fundamentals start to scare once again. But going into the week of the Euro-zone Summit, the Euro is biased bullish. -CV