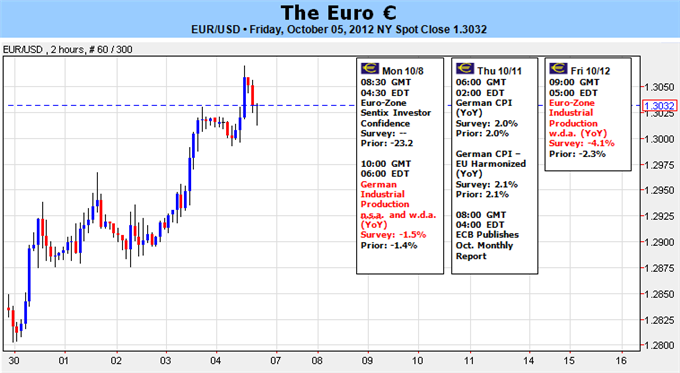 The Euro finished the week as top-performing major world currency in a volatile week of trade, but a post-US Nonfarm Payrolls US Dollar (ticker: USDOLLAR) bounce suggests that EURUSD gains could slow in the days ahead.

A relatively empty European economic calendar leaves all eyes on an upcoming European summit, but a sharp drop in FX market volatility expectations suggests that big Euro moves are somewhat unlikely. Our FX Options-based DailyFX Volatility Indices are once again near their lowest levels in four years, and most signs point to another slow week of forex trading. Yet it remains critical to watch the next moves in ongoing stresses in European fiscal debt crises—particularly as many speculate that Spain could soon announce its request for a bailout.

It is with a tremendous sense of déjà vu that we say we’ll watch for any surprises in an upcoming summit as EU Finance Ministers meet to discuss the region’s debt crisis on October 8-9. The Euro rallied as Spain approved a fairly aggressive 2013 Budget because many thought the announced austerity was a precursor to its formal request for a sovereign bailout. Yet Spain’s Prime Minister Mariano Rajoy dumped cold water on speculation that the formal call for aid would happen this weekend.

The Euro rallied sharply through September as the European Central Bank’s pledged unlimited bond-buying program for at-risk sovereigns. Yet the post-ECB excitement has been cut short as speculation grows that Spain may not submit itself to the EFSF/ESM guidance necessary for the central bank’s buying program. Spanish bond yields remain near the post-ECB lows, but marked day-to-day swings in European bond markets suggest that traders could quickly lose their patience with the Spanish government’s dithering. Scheduled briefings from ECB President Mario Draghi on Oct 9 could shed further light on the central bank’s next moves.

The Euro remains resilient despite more recent signs of market stresses, and indeed the most recent US CFTC Commitment of Traders data shows that large speculators are at their least-short EUR futures since 11/2011 when it traded at $1.42. Several weeks ago we wrote that Euro traders were growing dangerously complacent as all seemed too quiet across financial markets. The risk of complacency continues to grow as options traders are paying the lowest prices for EURUSD volatility since the pair set an all-time high of $1.60 in 2008.

As with most things in trading, moments of extreme complacency are only clear in hindsight and we could very well see the Euro trade higher as the US S&P 500 is just short of multi-year highs. Yet even the most bullish trends come to an end, and we would argue that potential risk versus reward on Euro positions makes fresh EURUSD longs fairly unattractive.

Fundamentals remain murky for the Euro, but our technical forecasts suggest the Euro uptrend could be put to the test on early signs of important reversal. – DR