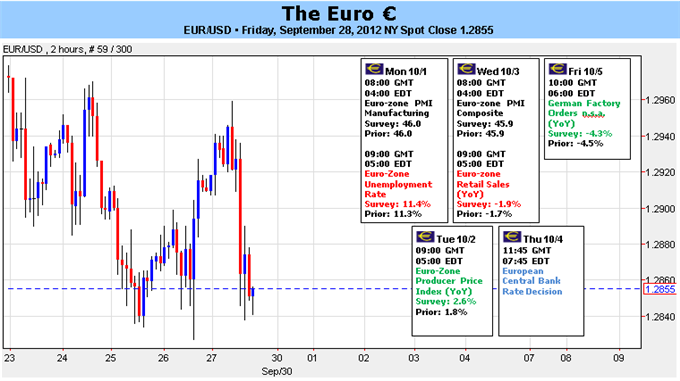 The monetary policy announcement from the European Central Bank headlines the economic calendar in the coming week, with traders hoping policymakers will supplement debt crisis containment efforts with measures to bolster economic growth. The final set of September’s PMI figures will set the stage: the reports are expected to show manufacturing- and service-sector activity contracted at the fastest pace since June 2009; this in the wake of aggressive deficit-slashing budgets announced in Spain and France last week amplifies the urgency of ECB action.

A Deutsche Bank index tracking the Euro’s average value against its top counterparts shows a significant correlation with benchmark German Bund yields. This suggests that additional ECB easing is likely to broadly weigh on the Euro against the majors as interest rates are driven lower. Alternatively, the single currency may find support if September’s pickup in region-wide inflation keeps the ECB on the sidelines this time around.

The centrality of the Eurozone recession as the most significant headwind facing global economic growth adds a layer of complexity to the equation as risk appetite considerations enter the mix. Indeed, an expected contraction of 0.5 percent this year carries market-wide implications not only because the currency bloc supplies close to a quarter of worldwide output but also through its knock-on effects on counties dependent on EU demand (like China, for example).

That may mean that an ECB decision to withhold stimulus will carry negative implications for risk appetite at large. In such a scenario, the Euro appears likely to come under pressure against go-to safe havens like the US Dollar and Japanese Yen, though strength can be expected against more overtly risky counterparts like the Australian and New Zealand units. By the same token, the introduction of growth-supporting measures may produce the opposite effect.

On balance, this makes for a conflicted outlook as yield- and sentiment-based considerations appear to stand in direct opposition to one another. Data from Credit Suisse suggests the markets’ priced-in expectations are heavily skewed toward an “on-hold” ECB outcome however. This suggests the path of least resistance favors protracted, sentiment-driven Euro weakness that is perhaps temporarily tempered by a near-term advance in the immediate aftermath of the policy announcement.