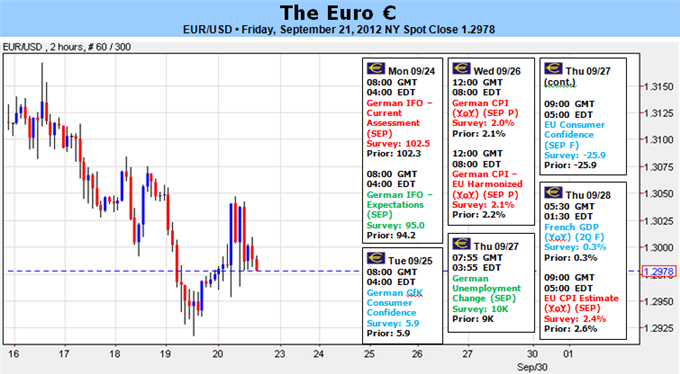 Euro Traders Dangerously Complacent – How Long does it Last?

The Euro finally showed signs of weakness as it fell against the US Dollar (ticker: USDOLLAR) for the first week in six on similar corrections in European and global stock markets. Yet the previously high-flying EURUSD remains an impressive 900 pips above July’s multi-year lows, and it will take a larger pullback to suggest an important top is in place.

A relatively empty European economic calendar and no major developments in European politics kept volatility low, but the coming week could change that as the Spanish government announces its budget for 2013. Spain is likely to announce fresh fiscal austerity measures as it contends with a crisis of confidence. Many believe that the budget announcement represents the last step before a formal request for aid from the troika of the European Commission, European Central Bank, and International Monetary Fund.

We can’t help but feel a sense of déjà vu as the euro braces for the seemingly inevitable Spanish request for a bailout. Yet a substantial improvement in European bond markets suggests that Spanish Prime Minister Rajoy is in no rush to formally seek aid.

The European Central Bank bought some time as it announced potentially unlimited bond purchases for at-risk Euro sovereigns through the Outright Monetary Transactions (OMT) system. The ECB emphasized that such support was conditional on a country’s submission to the oversight of the troika via the EFSF or ESM, but that didn’t stop investors from sending Spanish bond yields sharply lower. The cost to protect against a Spanish default over five years has fallen 34 percent this month alone and is down nearly 50 percent from its July peak.

International investors are clearly willing to give Spain’s government the benefit of the doubt on whether it will ask for and ultimately receive fiscal aid, but what if its politicians fail to deliver? Extremely low volatility and risk premiums across financial markets show that few traders fear such a disappointment.

Euro/US Dollar options show traders predict the smallest Euro moves since the onset of the global financial crisis in 2008. The last time we saw 1-month implied volatility levels this low was when the Euro topped at $1.3280 in May and the all-time record of $1.60 in 2008. These could be mere coincidences of course, but we can’t ignore the risk that quiet markets have lulled traders into a dangerous state of complacency. In other words—markets could be just a bit too quiet and the next episode of real turbulence could be around the corner.

Could the turn in sentiment happen next week? It would seem fitting given the real risk that Spain’s government could disappoint those positioned for the country’s bailout and the ECB’s bond buying. Yet betting on the turnaround is extremely difficult, and we’ll need to see real signs of reversal before claiming that the Euro may have set an important top.

It’s shaping up to be another make-or-break week for the Euro as it comes off of its strongest 30-day rally since late 2010.

The same risk of complacency exists in the US S&P 500 and broader risky assets. Question is—how long can it last? – DR