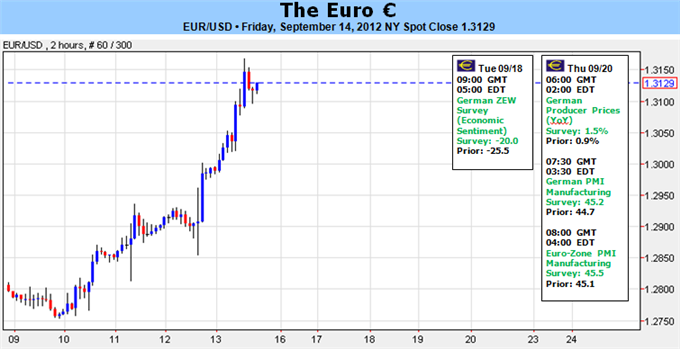 There is an advantage to monitoring and incorporating both technicals and fundamentals into our trading. In combining the two, I see the impetus for the most consistent and convincing bull trend for EURUSD since April 2011 – back when we were still in a cyclical bull wave. The economic and market events have certainly supported this move, but there is a temporary quality to the big ticket developments that suggest such an abrupt move higher can quickly find the euro in overbought territory. Determining when the masses lose their optimistic drive is rarely something we can do at a precise time and price level. We have to gauge momentum and watch the shift in sentiment.

Before I start speaking to my skepticism, it is critical to first appreciate the euro for what it has accomplished. EURUSD has closed a fifth consecutive weekly advance (the longest series since October 2010) with a 2.4 percent climb just this past week alone. From the July swing low, we have charged over 1000 pips higher. In a word, that is ‘incredible’.

Now, to gain a better handle on our bearings going forward, we need to look at the catalysts that have pushed us to this point. The recovery through August was encouraged largely by a drift higher in market-wide investor sentiment, which itself was founded on severely lackluster participation. A market that is seeking out positive signs and more forgiving of disappointing event risk is exactly what the euro needed – and it happened when the currency was scraping multi-year or record lows against different pairs (suddenly looking oversold).

More recently, the developments have become more tangible. The ECB’s announcement of the Outright Monetary Transactions (OMT) program and sharp decline in Mediterranean Eurozone government bond rates took immediate pressure off the proximity of crisis. And, of course, the Fed’s own open-ended stimulus program helps pad the global financial picture. However, the encouragement to risk appetite carries a diminishing level of return. Furthermore, the crisis resolution in the Euro-area isn’t nearly as convincing as it may seem at first blush.

The European Central Bank’s new program to buy unlimited amounts of bonds from governments that request a full bailout and meet criteria is a considerable step, but it comes with a stigma. Furthermore, those rules are more onerous than many appreciate (Greece for example wouldn’t make it). Both Italy and Spain have said they don’t see a need to tap the policy authorities support offering (they can thank the market’s good will), but this is likely a temporary relief. This latest round of efforts buys time like so many other Troika moves before it. Should general sentiment fade again, Spain will find itself in trouble once again, and the stigma of tapping the program under those conditions would be even more burdensome.

We will find out more about what will be done to make progress on the region’s ongoing financial and debt crisis through the weekend as the EU Summit that is being held through Saturday undoubtedly covers topics of Spain, Greece and other problems. The markets are very aware of the questionable effort to merely ‘buy time’ (rather than expedite the solution to underlying problems), but are policy officials? Furthermore, there are open risks related to the eventual Spanish stress test, the Greek budget agreement and most importantly investor sentiment itself. In the end, it is most likely a collapse in risk trends that undermines the Euro going forward. – JK