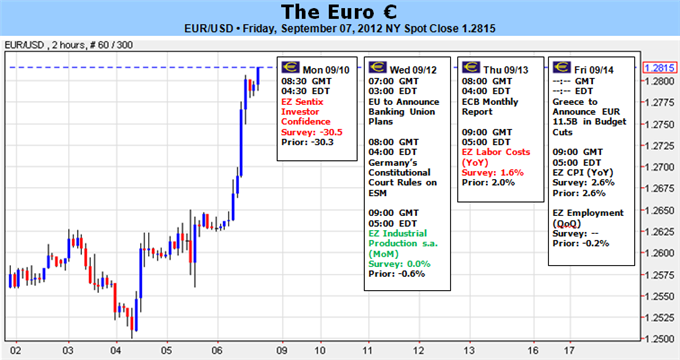 Euro Surges Despite Existential Threats – Does it Survive Week Ahead?

Euro Surges Despite Existential Threats – Does it Survive Week Ahead?

The Euro posted its single-largest weekly advance against the US Dollar (ticker: USDOLLAR) since February as a new bond buying plan from the European Central Bank eased Euro Zone tensions and forced many speculators out of their short positions.

Yet the Euro isn’t out of the woods yet: a critical German court ruling on the legality of European bailouts could rule recent ECB efforts null, while a potentially pivotal US Federal Open Market Committee decision could force substantial FX volatility.

The ECB announced unlimited bond purchases for at-risk governments via the Outright Monetary Transactions (OMT) program, and yields on 10-year Spanish Government bonds fell by their most in at least 20 years on the news. Yet the ECB put a clear caveat on the “unlimited” support; any given country would need to submit to the terms of the European Financial Stability Facility (EFSF) or the European Stability Mechanism (ESM) to receive aid from the central bank. The critical provision may prove a tough pill to swallow for the country in clearest need of fiscal aid—Spain.

The Spanish government has instituted deeply unpopular fiscal austerity measures in a bid to stabilize Spain’s balance sheet, but they would almost certainly be forced by the EFSF/ESM to institute further belt tightening despite overseeing a domestic economy mired in recession. The material bounce in Spanish bond prices/drop in yields suggests that most view plans as favorable. It’s nonetheless obvious that Spain and the Euro Zone are not out of the woods just yet.

A highly-anticipated German Constitutional Court ruling due September 12 could ultimately render debates over the ECB’s bond buying irrelevant. European bailouts have always been deeply unpopular in Euro zone paymaster Germany, and legal challenges against the ESM will come to a head as its highest court rules on its legality.

FX Options markets show that traders are paying surprisingly little for Euro/US Dollar volatility, and that fact in itself suggests that most put low odds on an adverse German ruling. But the existential threat to the Euro as a currency remains real, and we can’t ignore the possibility that the court could effectively undo endless efforts to keep the European Monetary Union intact.

If the Euro survives the German ruling on the 12th, it will look to a highly-anticipated US Federal Open Market Committee (FOMC) policy decision to drive further volatility on the 13th. Sharply disappointing US Nonfarm Payrolls data for August increased odds that the FOMC would vote for further Quantitative Easing (QE3) measures and effectively print US Dollars to boost growth. Some claim that there is a 50% chance of QE3 on the Sept 13 announcement, and the Dollar’s reaction to disappointing NFPs data suggests it stands to fall further on such an announcement (sending EURUSD higher).

There’s a lot riding on the week ahead, and it will be critical to watch whether the recent wave of Euro/US Dollar short-covering continues on make-or-break event risk out of Europe and the US economy through the second week of post-summer trading. – DR