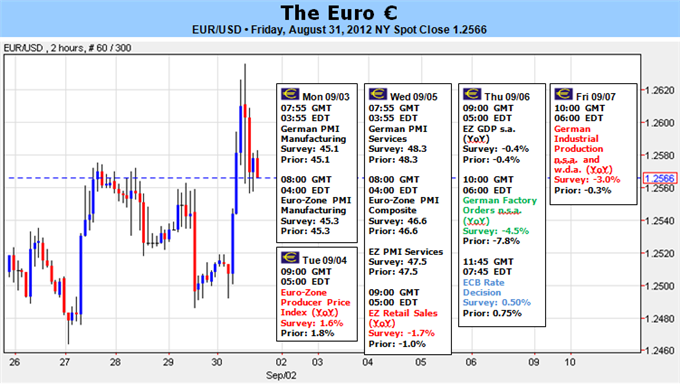 Last week, financial markets appeared singularly focused on Ben Bernanke’s speech at the Jackson Hole Symposium, with the major asset classes at near-standstill as traders refused to commit to a directional bias until guidance on further Fed stimulus came across the wires. In the week ahead, a similar dynamic appears likely as traders focus on the other defining theme of the macro landscape – the Eurozone debt crisis – with investors wholly consumed by the outcome of the ECB interest rate decision. The hope is that Mario Draghi and company will finally unveil the details of the heretofore opaque bond-buying program meant to contain the rise in borrowing costs for debt-strapped Eurozone member states and bolster regional financial stability. These ECB is likely to fall short of such expectations.

Draghi initially hinted on August 2 that the ECB would create a program to buy government bonds of Eurozone member states that apply for funding assistance through the European Stability Mechanism (ESM), the permanent bailout fund set to replace the temporary EFSF. The central bank chief even opted to skip the Jackson Hole summit – where he was scheduled to speak – citing a busy schedule, fueling speculation that ECB policymakers were hard at work finalizing the bond-buying plan in time for an introduction at the September 6 policy meeting.

In practical terms however, any bond-buying program contingent on the ESM unveiled in the week ahead will be operationally toothless, making its possible emergence essentially moot. Germany’s Constitutional Court is set to rule on the compatibility of the ESM with domestic law on September 12. Needless to say, tying the program to a formal ESM aid request would be problematic if the facility itself failed a test of constitutionality in the largest economy in the currency bloc and the leading financier of its debt crisis containment efforts.

On balance, this means the market-moving component of the monetary policy announcement is likely to be found elsewhere. Growth-driving efforts such as a reboot of LTRO operations, a loosening of collateral requirements to attain ECB funding, or an outright interest rate cut may help to underpin risk appetite considering the slump in the Eurozone amounts to the most significant headwind facing global output. Opting for a discussion of the bond program’s framework – presumably the focus of the ECB’s efforts over recent weeks – without such steps is likely to open the door for disappointed selling of the Euro and risky assets large.