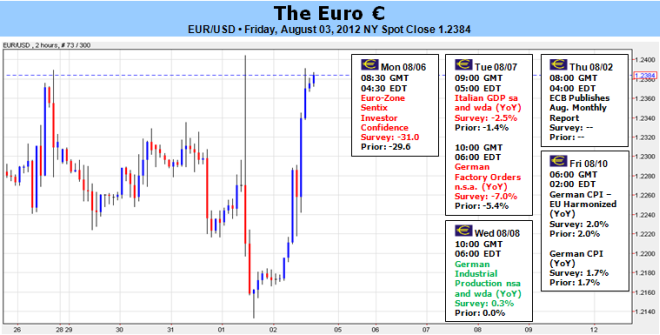 Euro Strength Will Only Persist if Spanish Yields Stay Low

Based on the performance of the Euro the past two weeks, one would be led to believe that a good deal of the problems plaguing the single currency has been solved. While the EURUSD only rose by +0.52% the past five-days, it is trading up near a significant level of resistance that if triggered, could lead to another 300-pips or so in a very quick period. Indeed, the ascension from 1.2040/45 up to a few pips above 1.2400 was meteoric, but this was largely predicated around one development: the easing of sovereign debt yields in Italian and Spanish bond markets.

These developments, particularly in the Spanish bond market, are the lynchpin to market stability going forward. After Spain requested (and received) €100 billion in aid for its banks, worries have arisen that the Spanish sovereign will need a full bailout itself. This is due to the fact that Spanish banks hold over half of all Spanish government debt; if one goes down, so too does the other.

But yields will not stay low on their own; as market participants demonstrated at the end of this week as exhibited by the Euro’s fickle price action, the European Central Bank needs to be behind any actions that will have a long tenured influence on keeping Euro-zone pressures calm. We think that this is possible, but we need to consider two items first.

First, Germany is not behind a full-scale bond buying program as evidenced this week at the European Central Bank policy system. President Draghi alluded to the fact that all but one policymaker was on board with doing “whatever it takes” to save the Euro; we coyly suggest that its Jens Weidmann, head of the Bundesbank (Germany’s central bank), and the most important policymaker outside of the president himself. Furthermore, last week, Wolfgang Schaueble, Germany’s finance minister, called rumors of a bond buying program to cap Spanish yields “speculation.”

Second, even if Spain applies for assistance from the two European bailout funds, the European Financial Stability Facility (EFSF) and its successor, the European Stability Mechanism (ESM), there’s little room for error on behalf of every other embattled European country: the Spanish bailout could sap all but €10 billion from both the EFSF and the ESM; this surely won’t be enough to bailout Italy, when the time comes (it will by early-2013, just as every other country before it has succumbed to the crisis).

Beyond paying attention to Italian and Spanish yields (mainly the Spanish 2-year note), there’s little by way of the European economic docket that’s worth paying much attention to. The second quarter Italian GDP reading is out on Tuesday, and a steep -2.5% year-over-year contraction is forecasted for the second quarter. If this print misses, we should expect the Euro to come back under pressure, at it will likely mean further austerity in Italy which could lead to further tensions in the bond market; as explained above, at current capacity, the EFSF and ESM can’t afford to bailout both Italy and Spain, as presently constructed.

In light of the careful balance the market is in right now – teetering between utter bliss at the notion of a European Central Bank sanctioned moratorium on high yields in Spain and sheer panic on the premise of bailouts for both Italy and Spain – we take a neutral but very cautious outlook on the Euro going forward. –CV