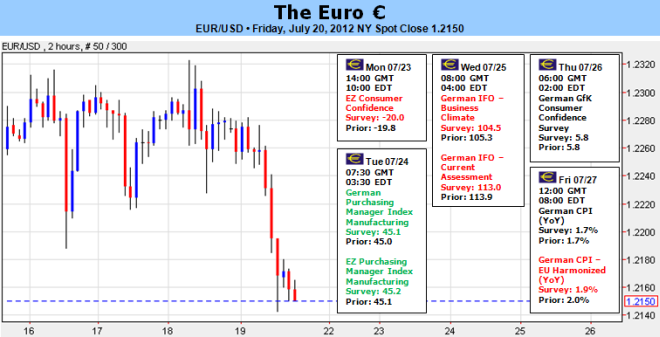 The Euro slipped to a fresh yearly low of 1.2143 amid the weakening outlook for the region and the single currency may track lower next week as the economic docket is expected to show a growing risk for a prolonged recession. Although Spain remains on track to tap the EUR 100B bailout package, the government lowered its growth forecast and now sees GDP contracting 0.5% in 2013, and the economic slowdown reinforces our bearish outlook for the EURUSD as we expect the European Central Bank to carry out its easing cycle throughout the remainder of the year.

As manufacturing and service-based activity is expected to contract again in July, the ongoing slack in private sector activity is likely to fuel bets for another rate cut, and the ECB may continue to strike a dovish tone for monetary policy as growth and inflation taper off. According to Credit Suisse overnight index swaps, investors are still pricing an 83% chance for a 25bp rate cut at the August 2 meeting, but we may see the Governing Council lean towards a zero interest rate policy (ZIRP) as the fundamental outlook for the region turns increasingly bleak. At the same time, we saw the International Monetary Fund encourage the ECB to pump more liquidity into the system through its asset purchase program amid ‘a sizable risk,’ and the central bank may have little choice but to implement a range of tools over the coming months as the debt crisis continues to drag on the real economy. As heightening finance costs across the European periphery raises the threat for contagion, we may also see the flight to safety gather pace in the week ahead, and the EURUSD looks primed to extend the decline from earlier this month as the EU maintains a reactionary approach in addressing the debt crisis.

As we’re expecting to see a slew of dismal developments next week, we should see the downward trend from 2011 continue to take shape, and the drop in risk sentiment should produce fresh yearly lows in the EURUSD as European policy makers struggle to restore investor confidence. In turn, we may see the euro-dollar make a run at the 1.2000 figure to test for psychological support, but we will be keeping a close eye on the relative strength index as it approaches oversold territory. - DS