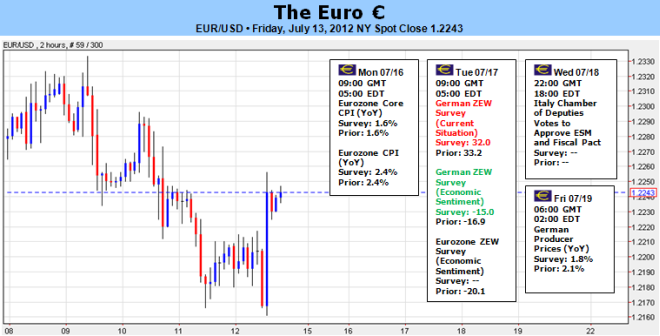 There is no shortage of fundamental justification for the Euro to extend its painful collapse, but history has taught us that the market will decide what is important and what isn’t. This past week, EURUSD slumped to its lowest level in two years – a region that notably aligns to the midpoint of the pair’s historical range (roughly 1.2135). From a purely fundamental point of view, we could point to the failed promises of the EU Summit and erosion of confidence in the region’s ability to stabilize its financial sector as the source of this malaise. Yet, the headlines were more sparse (compared to the lead up to the Summit two weeks ago) and price action didn’t line up to the news that did cross the wires. Through the past week, EURUSD’s looked far more like the S&P 500 futures’ performance than a self-guided event driver.

Historically, the correlation between the world’s most liquid currency pair (EURUSD) and my favored measure for risk appetite (the naturally long-biased and stimulus-supported S&P 500) has been pretty strong. This is due in no little part to the greenback’s position as an ultimate liquidity provider and the euro’s position as the center of the world’s greatest financial threat. However, the balance of sentiment moving forward will more likely guide the health of the European financial system rather than the other way around. That means that the round of open-ended and detail-deficient vows made at the EU Summit will stand as yet another successful bid to buy time – rather than solve the underlying issue.

In general risk trends, we can measure the market’s tolerance for taking on otherwise questionable European assets. Given EURUSD’s position just above its historical midpoint and the floor of a long-term technical congestion pattern, it makes sense that a strong fundamental push is needed if we are to eventually move below 1.2000. Looking for the heavy-hitting catalysts moving forward, there is a notable lack of big-ticket items like a preliminary GDP reading to guide global growth expectations or a critical policy gathering that could cater to stimulus hopes. That leaves the market open to find its own way without distractions or catalysts to sidetrack it. On tap, we have updates to IMF growth forecasts on Monday. There is some lingering hope that Bernanke can broach the topic of QE3 at his Congressional testimony Tuesday and Wednesday – another source of disappointment if it fails to make an appearance. Perhaps one of the most influential (but disparagingly vague) developments is the build of the 2Q US corporate earnings season. Any opportunity to impress upon the market that collective expectations for returns were set too high is an open invitation to unwind.

Though the general state of sentiment across the global markets can have greater sway over the euro’s health next week, we shouldn’t tune out the fundamental event risk on the Euro’s docket. Given the dubious, long-term health of the Euro Zone itself; developments that undermine the bid to win stability can further expose the region to troubling shifts in global currents. Perhaps the most compelling event risk is the EU Finance Ministers’ meeting on Friday. This is supposedly a follow up to the July 9 meeting to discuss the implementation of the direct rescue of sovereigns through the ESM, details on Spain’s rescue and revisiting Greece’s terms. Yet, after two failed efforts to hammer out the specifics, expectations are likely low. On Wednesday, the EU will release a report on the Euro Zone’s public finances. This can either offer a rude awakening or (more likely) it will put an optimistic twist on poor figures – leading the market to write it off. Also of note is a round of bond auctions. Greece, Portugal (its second since reentering the market since its bailout), Spain and Italy are all scheduled to sell debt. Though they have not be heavy market moving events, they have steadily tracked out deteriorating confidence.

As we weigh fundamental reality versus the capricious appetites of speculators, it is worth considering alternative complications in capital flows. A theory for the euro that has recently gained considerable traction is that deterioration in regional financial conditions and/or drop in risk appetite, leads European banks to repatriate capital from foreign investors. A Bank of America research report illustrated a more than 40 percent drop in Euro-banks holdings of foreign assets since 2008. This could prove a permanent buffer to selling pressure – thought it wouldn’t likely fully offset it. For now, I am a fundamental bear with technical and speculative reservations for follow through. - JK