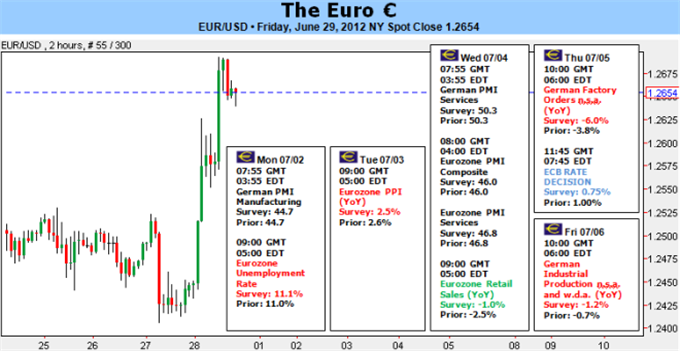 If it weren’t for this past Friday’s blockbuster rally, the euro’s week would have been essentially wasted. EURUSD mounted its biggest rally since late October in a single move that was triggered by unexpected progress at yet another ‘critical’ European crisis discussion. Yet, despite the momentum on this swell and the confirmation from government bond yields and general risk appetite trends; there seems a larger call to fade this run than any other rescue/stimulus-driven move from European officials in the past. What’s more, this is not just a building call amongst the speculative ranks. It is a warning that has been issued by respectable and often conservative economists and bank research teams. Does such a loud consensus guarantee the euro’s reversal and extended collapse?

It is interesting to note that Friday’s EURUSD rally (1.8 percent) was the largest since exactly October 27. For reference, that previous rally was sparked by the Greek debt deal which arguably extinguished an immediate crisis fire; and yet the market still pulled an immediate about-face and tumbled 1500 pips in less than three months. That doesn’t mean that the euro is destined for the same fate this go around, but the fundamental comparisons between the current situation and October are remarkable. And, if anything, they are worse now.

Reviewing the spark that ignited the roar of euro confidence this past week, we find there were very extraordinary policy concessions that were after the first day of the Summit...at least it seemed that way at first glance. The official statement from the group itself was convoluted and ambiguous – likely by design. Overlooked were the easily won European Investment Bank €10 billion funding increase and the €120 billion Growth Pact. The French, Italian and Spanish Prime Ministers were focused on the short-term threat of a building financial crisis and the risk it posed with spreading beyond Spain and deeper to the core. Running the negotiations into the early morning hours Friday, the results were a seeming defeat for fiscally-minded German and victory for the high-yield counterparts.

The critical highlights from the event included: Spain finding direct funding for its banking sector using EFSF funds without a seniority issue; agreement that a common, Euro-area banking supervisor would need to be created; clearance for the ESM to fund banks directly; and most ambitiously of all, approval for the ESM to buy government bonds to stabilize sovereign rates. That seems a serious escalation of the crisis fight, until we look at the details. The particulars of the Spanish bailout are still open to debate and funding comes after a Memorandum of Understanding is worked out. The bank overseer is due sometime before the end of the year and there are no details. Before the ESM program can directly fund banks, we need the bank supervisor. Further, with €100 billion already earmarked for Spain, the fund only has €400 billion left. Finally, we have the critical effort to cap sovereign yields that explicitly requires meeting certain conditions (which have not been explained) and it too requires a Memorandum of Understanding.

All the major points of progress in this Summit require additional agreements and are subject to conditionality that conservative Euro Zone members will certainly set high benchmarks on. A year ago, this would be a reality we priced in through the ‘medium term’ and await the markets to run through the good will the promises offered before they realized the lack of content. This time around though, we are dealing with a market full of skeptics that are more than aware of the global slowdown and now multi-sources of financial instability.

Given the heavy voice of doubt at the usually reserve economist-level, speculators will likely be on edge heading into the new week. Should risk trends falter, the euro will easily cave to pessimism. However, there are a few things we need to keep a close eye on. Wednesday’s US liquidity lull for the Independence Day holiday can change the dynamic of trends. More importantly, Thursday brings the ECB rate decision. A rate cut would lower its return potential and a lack of an LTRO program would leave the door open to volatility. A word to government bond purchases will be forefront in bulls’ minds. And, then we always have risk appetite distraction in Friday’s US NFPs. – JK