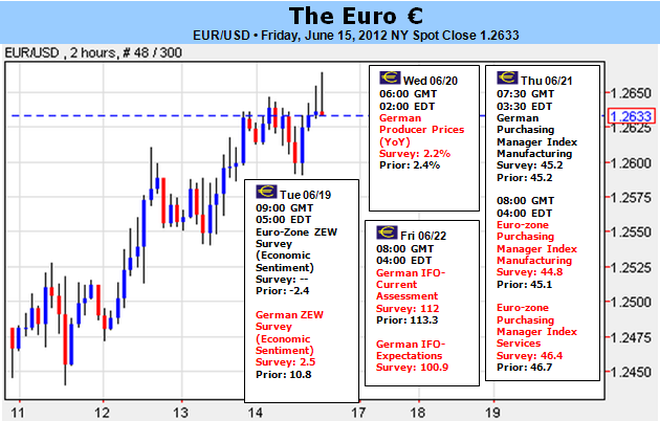 We have faced a number of pivotal moments in the ever-evolving financial crisis for the Euro-area over the past two years. Compared to the last minute debt restructuring and second bailout approval for Greece back in March, a repeat election may not seem to be as critical to the country or region. Yet, this is perhaps the most decisive event the Euro has ever faced in its relatively short existence. The financial media and speculative hordes have assigned a binary outcome to this vote. Should the anti-bailout Syriza party win, the fear is that Greece will be on an inevitable path to exit the Euro Zone. In a New Democracy vote, there is a relief. In reality, the fundamental outcome and market reaction will be more complicated than that. However, one thing is almost certain: extreme volatility.

What makes the Greek vote so dangerous is that it will take place and produce results through the weekend before the Asian session officially opens for trade Monday. The absence of liquidity means there will likely be a sudden adjustment regardless of what the outcome happens to be. Those that look for swing and scalp trades should be flat for the wave of event risk or significantly reduced exposure. Even those with longer-term, fundamental positions should respect the possibility of a significant sentiment shift after all is said and done.

There is a danger in expecting a black-and-white outcome for the Greek election. In fact, it is likely to carry a number of complexities that could delay and exaggerate speculative adjustment. Nevertheless, there is no doubt a large contingency of the market that will simply react to either Syriza or New Democracy carrying the larger percentage of the vote.

Given Syriza’s vow to tear up austerity agreements tied to previous bailout agreements, the popular belief is that their win would lead to the country’s exit from the Euro Zone. While party leader Tsipras has said that Syriza wants to retain membership in the EZ and that policy officials would not withhold support or force their exit in the event of broken covenants, that is likely unrealistic. As such, the market could easily see the worst for this step – an exit, a wave of losses for debt holders, deterioration in credit health for the remaining members and possibly even the fall of the euro. This would obviously stir short-term fears for a heavy euro selloff, but it would likely also spread to underlying risk trends. That said, we have an immediate back up to stabilize global financial conditions (though probably not the Euro). EZ ministers have scheduled a meeting on Sunday – most likely waiting to offer liquidity support if conditions warrant. Beyond that, we have a G20 meeting Monday and Tuesday which could open up global funding. And, on Wednesday we have the Fed rate decision.

A Syriza win is a worst-case-scenario, but an outright majority is extremely unlikely and even a coalition for which they helm is doubtful. Before opinion polls were blacked out, figures were showing 75-80 percent of Greeks wanted to keep the euro and stay in the Euro Zone. Given the connection (unreasonable or not) made between Syriza’s anti-bailout stance and an exit, voters will more likely keep to the trend we had seen whereby ND was taking a lead. Here again, there is unlikely to be a majority, so a coalition is necessary. The first attempt at an election failed to generate a viable coalition that could secure more than 50 percent of the 300 parliamentary seats, but policy officials recognize the risk of drawing this out further. Therefore, a conclusion will likely be found.

Deciding a coalition could take time, but the relief in Greece stepping back from an exit would likely offer buoyancy to the euro and global risk trends. From that point, market participants would quickly move on to determine whether the G20 and/or Federal Reserve will contribute to or hinder optimism by supporting moral hazard (front-running heavy-handed government investment). This is the intense focus over the first half of the upcoming week. However, it is important to remember that the vote and likely additional stimulus efforts does very little to solve underlying issues. Under the perfect stimulus/relief conditions, the market can find itself distracted for a short period. Yet, whether immediate or delayed, the markets will eventually return to unresolved issues for the Euro and global markets. – JK