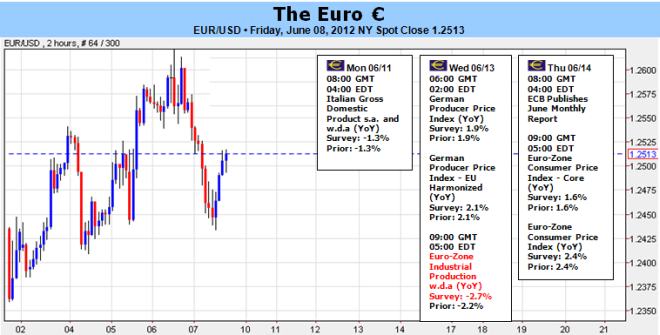 Euro – Is this the Recovery or the Calm before the Storm?

Euro – Is this the Recovery or the Calm before the Storm?

The Euro bounced sharply off of multi-year lows in a week of impressive recovery for the US S&P 500 and broader financial markets. Yet a fresh wave of downgrades and generally sour news out of the Euro Area meant that the EUR ended only modestly higher against the safe-haven US Dollar. What can we expect in the week ahead?

The first full week of the month has produced an important bounce for the Euro against the US Dollar, but it may take a material improvement in European market sentiment to force a larger EURUSD rally. A relatively empty week for European economic event risk leaves market focus squarely on developments in European fiscal crises.

European Central Bank President Mario Draghi could partly be blamed for stoking market tensions as the ECB made it clear that there was little the central bank could or would do to further help Spain and other countries in the midst of clear fiscal crises. The ECB has already taken significant steps to ease market tensions, but it is ultimately a political problem that will require political change—not monetary policy easing. That said, several members voted in favor of an interest rate cut and there’s reason to believe this sets the stage for a move at their upcoming meeting. Lower interest rates could in fact ameliorate financial market tensions but are less likely to help the Euro itself.

Spain otherwise continued dominating headlines, and the next developments for the at-risk government and banking system will likely drive sentiment in the week ahead. Fitch Ratings downgraded the Kingdom of Spain’s long-term debt rating by a three notches to BBB with “Negative” outlook. The downgrade itself didn’t come as a major surprise, but the severity of the downgrade and the fact that it is just two notches above “Junk” territory hung heavy on Spanish bonds. If Moody’s Ratings Agency becomes the third major agency to downgrade Spain (alongside Fitch and Standard & Poor’s) to the BBB level, banks using government bonds as collateral at the ECB will be required to post an additional 5% in capital to secure existing and new loans.

Spanish banks are perhaps the biggest risk to the central government and—by extension—to Euro Zone financial stability through the foreseeable future. An additional collateral requirement at the ECB would put further pressure on bank balance sheets at exactly the wrong time as the country’s fourth-largest lender was just nationalized due to outsized losses. The Center for European Policy Studies estimates that Spanish banks may face €270 billion in funding needs—a sum that would represent over a quarter of Spanish Gross Domestic Product. Spain’s government is currently facing significant difficulty as it funds bond redemptions and an estimated 2012 deficit worth another 8.5 percent of GDP. Add another 25+ percent and debt could quite easily spiral out of control.

The dangers to the Euro Zone are clear, but whether or not the Euro presses to fresh lows is another matter entirely. Many speculate that a bailout package for Spain is imminent and indeed inevitable. Will this be enough to save the Euro? In this author’s opinion, that is very unlikely. It all seems like a case of déjà vu as the Euro feels the pain from remarkably unequal growth and productivity levels within Euro countries. It seems like the best strategy may be to sell major rallies within the clear downtrend dating back to 2008. – DR