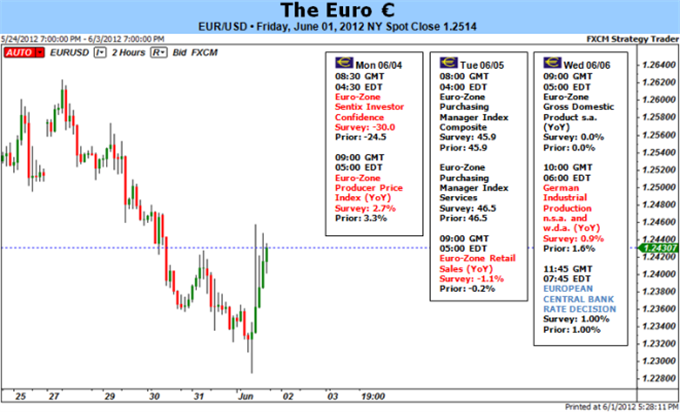 The Euro’s fundamental troubles may finally be setting the global financial markets alight. Turning back the clock to 2007-2008, the world’s worst financial disaster in generations was ignited by a particularly catalyst from the United States – derivatives built on subprime housing loans. It seems that the Euro Zone’s sovereign debt crisis could be the impetus for the second wave of an enduring dislocation for worldwide markets. Transmission is highly likely given the downturn in growth, the exceptionally low yield available to entice investors and the reticence of lenders drying up the credit markets. One difference that we should recognize, though, is that unlike the dollar’s ability to draw benefit from safe have flows; the euro will remain the epicenter of any global catastrophe.

This past month has been a spectacularly poor one for the euro. Through May, the shared currency dropped an astounding 9.1 percent against the yen and 7.1 percent against the US dollar – both prominent safe havens. Against the yield-heavy commodity bloc, its performance has proven substantially more robust; but looking back over a few years worth of price action, we see that the euro stands near long-term lows. The euro is a fundamentally-troubled currency in the truest since.

As we see watch the flames rise across the globe, we need to remember the progress the euro makes. As others currencies suffer for general risk trends, the euro’s own troubles could be deemed minor in comparison and it could subsequently rise because others are simply falling from a greater height. To keep its bearish lead, we would need progress on the region’s numerous troubles. Spain is still the current favorite for volatility and the nation’s Economy Minister made it known Spain’s future with the euro was at stake if support was not forthcoming. Where has Greece gone? The situation is still painful and speculation of a near-term exit dominates forecasts, but there may be time before the reckoning as the second election is scheduled for June 17th. Then there is always the possibility that another player can come back to the forefront. Portugal is selling bonds this week. Ireland just voted ‘yes’ on the financial referendum, but still have issues.

With the tab computed, we need to establish under what conditions the euro can actually outperform. To outperform the higher-yield currencies, a self-generating risk aversion cycle could elevate the situation beyond Europe’s troubles and coincidently bolster the troubled unit. There is also the chance for support through ‘extra-curricular’ means: stimulus. Spain has been protesting from the ECB to restart its SMP effort to purchase its government bonds so that the country can tap life-sustaining market funds. We’ll see the results of last week’s efforts Monday and any intra-week efforts they will let leak through traders. Another means of potential support can be found in Thursday’s rate decision. Either another LTRO program or an elusive rate cut could help rouse confidence. Expectations are low amongst economists and in the market, but that’s the best scenario for catching the market off guard.

As we play ‘who has the worst current situation’ going forward, we should remember that the issues in Europe only continue to worsen over time. Buying time is the region’s officials have become adept at, but temporary fixes are just that – temporary. And, consistent failure to fix a systemic issue only creates a greater eventual downfall. As the threat of a member’s exit from the union and crisis spread build, we are seeing systemic cracks in what many had believed was the next, premier reserve currency.