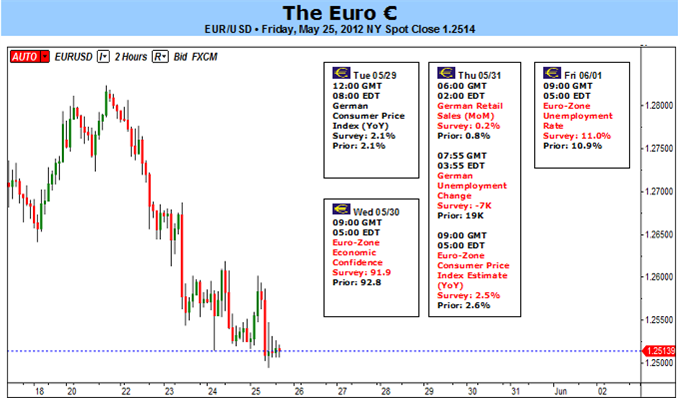 The Euro broke substantially lower against the US Dollar (ticker: USDOLLAR) as clear financial market panic sent investors fleeing the Euro in favor of the safe-haven US currency.

There was a distinct sense of déjà vu as Greece continued dominating news headlines and professional traders now price in a non-trivial probability of a Greek exit from the Euro Zone. Markets don’t move in straight lines, but such extremely bearish sentiment will likely keep the Euro under pressure in an action-packed week ahead.

European debt crises will keep eyes on news out of Greece and official rhetoric, and key US growth and employment data will further add to volatility in the days ahead. Friday’s session reminded us of a popular aphorism in investing: “There’s never only one cockroach in the kitchen.” Traders remained on edge waiting for the next market-moving news out of Greece, but most were caught by surprise when headlines out of Spain helped send the Euro to fresh lows.

Catalonia—the most prosperous autonomous region of Spain and one of the “Four Motors for Europe”—asked the central Spanish government for fiscal aid. The intensely nationalist Catalonians face €13bn in funding needs through 2012, and it is easy to assume they explored many other options before asking the central government for help. Given that Spain itself sees significant funding needs and extremely high borrowing costs, the danger to the Euro Zone’s fourth-largest economy is clear. There is never only one cockroach in the kitchen, and we can’t expect this will be the last we hear of further Spanish funding difficulties.

The Euro stands to fall further against the safe-haven US Dollar amidst uncertainty, but the US economy itself could change market dynamics as this week brings reports of US Gross Domestic Product Growth and US Nonfarm Payrolls employment data. The first revision to Q1 GDP data could force volatility on major surprises, and US NFPs figures stand to spark even further volatility.

The key question is whether the US Federal Reserve will ease monetary policy further in the face of slowing domestic labor market growth and financial market difficulties. To that end, any especially large surprises in NFP data could force major moves not only in the US Dollar but across the board. The first three months of the year produced significant US employment gains as unseasonably warm weather and other factors boosted demand for labor. Yet seasonal effects by definition balance themselves out over the course of the year, and a subsequent drop in jobs growth isn’t terribly surprising. A more substantial fall could nonetheless prompt calls for the third wave of the Fed’s Quantitative Easing (QE3) and markets would respond in kind.

Overall market trends are clear, and general uncertainty favors staying short ‘risk’ and long ‘safety’. For the Euro, it means being short EURUSD, EURJPY, and to a lesser extent the EURGBP. Traders and broader markets remain extremely bearish and there is perhaps risk that sentiment and positioning is a bit too extreme. There is a strong chance that we may see a short-term relief rally, but it seems imprudent to speculate on the small bounce within the larger downtrend. From a fundamental, technical, and sentiment perspective we favor selling into any significant Euro rallies. – DR