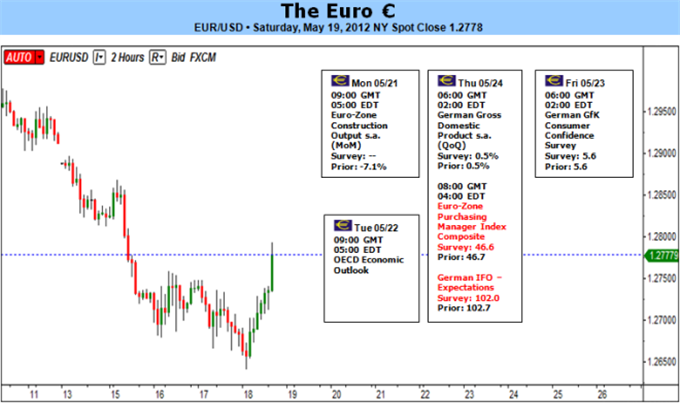 Euro: ‘Buying Time’ May Not Work This Time as Crisis Intensifies

Euro: ‘Buying Time’ May Not Work This Time as Crisis Intensifies

There are many comparisons being made to current Euro-region market conditions and those back in the second quarter of 2010 when trouble just started brewing for Greece. However, it is perhaps better to draw the connections to the situation now and that of the second half of 2008. With the financial crisis three and a half years ago, both investors and policy officials were incredulous that the situation could spiral out of control so quickly due to the interconnectivity of the global financial markets and the speed with which panic can spread. This time around, recent history has made the masses cautious, policy officials have clearer threshold at which they will act and there is less retail leverage behind current highs. That said, we have overextended the dependency on central bank / government support, growth is slowing once again and the source of the next potential global pandemic is a long-festering, structural problem of the Euro Zone.

For two years now, the modus operandi for European officials has been to ‘buy time’. Whether intentional or not (under most cases it is not intentional), changes to policy and rescue efforts have secured a short period of market calm rather than genuinely solved underlying issues. Yet, as with the diminishing influence of US easing programs on the country’s capital markets, the market has found less and less reprieve from EU officials’ efforts as of late. There are multiple ‘hot spots’ that are being managed at this moment.

The most prominent concern (in other words, the most headline friendly) is the possibility of a Greek exit from the Euro Zone. The is such a prominent threat for the shared currency because the impact of this worst-case-scenario is so significant – and it is no longer such a far-fetched outcome. The time table for this threat, however, is probably not as dire as the media would like it to be (it it bleeds, it leads). Speculation that the country will announce its exit sometime next week are unreasonable as such a decision is not likely to be made under a caretaker government. On the other hand, a recovery after having sunk this deep is unlikely. For now, we wait until the next election supposedly on June 17 to see what next steps will be made as few decisions will be made without a government.

Another, more expansive concern is the broader region’s financial health. Spain in particular seems at-risk. We have seen capital outflow from the banking system, a closed funding market and trouble with collateral sink Greece to brink of a banking collapse. Now, we are starting to see similar symptoms in Spain. The nationalization of Bankia, a forced merger amongst shaky cajas and reports of mass withdrawals speaks to spreading panic. If this is not quelled quickly, we will have a serious problem as it quickly returns to the other bailout countries (Ireland and Portugal) and potentially even exposed core members (like Italy).

Most of our fundamental guidance this coming week will come via the larger themes and splashy financial headlines, but there are a few scheduled milestones that should be monitored. On Tuesday’s we have regional consumer confidence figures as well as a Spanish and EFSF bond auction. Thursday, there is the second reading of German GDP numbers (the components can see sizable revision), but the real growth reading is the PMI figures for May – timely and accurate proxies for regional activity. Beyond that, we need to watch what the policy makers are saying. Are they keeping a strong front or do they continue to head down the road of capitulation? - JK