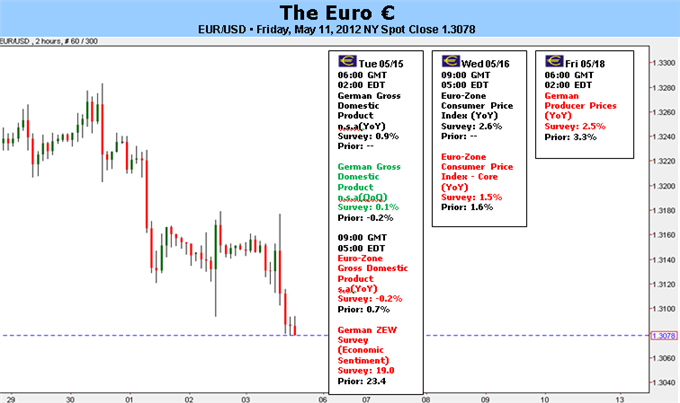 Euro Tumbles the Start of a Much Bigger Breakdown

Euro Tumbles the Start of a Much Bigger Breakdown

The Euro broke decisively lower against the US Dollar as disappointments in Greek elections and broader Euro Zone difficulties proved enough to force a major shift across financial markets. It was initially a feeling of déjà vu as the EURUSD dropped sharply into the first week of May—just as it had done in April only to finish where it began. Yet clear fundamental and sentiment shifts suggest this may be the break many have expected, and volatility seems all but guaranteed in the week ahead.

A clear disappointment in Greek general elections sparked renewed market tensions, and a deterioration in Spanish fiscal and financial conditions only stoked further European financial market turmoil. Successive years of biting austerity for Greece meant that voters forced out the ruling party and showed record support for a fiercely anti-austerity party on the far left. Yet the sharp swings essentially produced a stalemate as the top three parties seem unable to form a majority government. In effect this leaves Greece to unable to comply with stringent fiscal rules attached to recent bailouts. And indeed, it seems as though the election results leave Greece even closer to hard default and likely exit from the single currency union.

Spain likewise drew headlines as the Spanish government announced it would fail to meet targets for fiscal tightening, while officials nationalized another domestic bank at clear risk of insolvency. The combination served as clear reminder of the difficulties surrounding the Euro Zone’s fifth-largest economy.

Years of impressive real estate growth left the Spanish banking system with massive loan portfolios, and a sharp economic downturn has produced significant losses. All the while, the central government not-so-subtly depends on Spanish banks to buy government debt as international investors turn away. In short: the Spanish government needs continued bond purchases from domestic banks to avoid seeking international bailouts. Yet those same banks may need bailouts of their own, and the risks to Spanish sovereign debt and credit markets are clear.

Is this all enough to force a sustained Euro breakdown? If so, why haven’t previous episodes of fiscal tensions been enough to force the Euro/US Dollar significantly lower? The US CFTC Commitment of Traders report shows that Non-Commercial traders—typically professional speculators—have remained aggressively net-short Euro futures despite an important EURUSD bounce through 2012. In other words: many have kept their Euro-bearish bets through choppy market conditions.

Recent COT data shows that speculators increased their net-short Euro position by the most since the week ending May 10, 2011. The shift came soon after the Euro set an important top above the $1.48 mark, and the most recent sharp shift warns of the potential for similar price action in the future. In subsequent weeks the pair fell another 400 pips before bouncing sharply and consolidating for the next four months. Could we see similar moves in the weeks ahead? Given such a sharp week-over-week shift in positioning, we think further volatility seems all but guaranteed. - DR