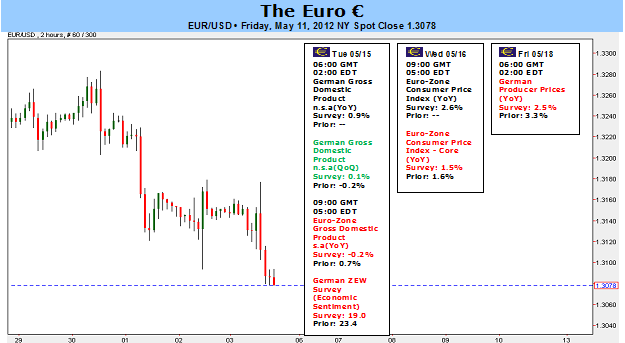 The euro is facing an identity crisis: will we still be using the same currency six months from now or will its composition (component economies) present a very different trading instrument. This can be a very expansive an abstract topic – one that we will hold off from for now. We will better break down the various scenarios that could arise from that situation if and when it becomes clear that that is the path we are taking. For the immediate future, the concern is the market’s perception of the future – whether we are heading down the path of crisis or not. The recent round of headlines and Euros struggles (against a backdrop of persistently buoyant risk appetite trends) suggest concern is already starting to build. As former US President Franklin D. Roosevelt said, “the only thing we have to fear is fear itself.”

As we move forward, we have to appreciate the weak footing that the euro has already found itself on just this past week. The hold on rates from the ECB this past Thursday has unbalanced the risk-reward equilibrium (reducing the potential return of holding the currency) and panic-inducing headlines have started to cross the wires at a more rapid pace. Fear that a full-blown financial crisis will take in Spain has already been on our radar for some time; yet to this point, interest rates really haven’t suffered for this concern – thanks largely to large lending programs (LTRO) and the expectation that the central bank will swoop in to purchase Spanish government bonds should conditions deteriorate.

That said, we have seen many times in the past where the promise of Euro Zone support has fallen through – only to be relented upon at the last possible moment to avert catastrophe. As it has been the case many times before, at some point, fear will outweigh open ended promises and possibly even the scope of support loosely promised. In comes a new rumor that raises concern: that a major Spanish bank has called on the ECB for another round of massive lending – an LTRO3. Normally, requests for the entire system could just be a policy opinion from a market participant; but coming from a big player in a fragile region, it smacks of instability. That is particularly true with bank deposits just starting to decline and given German Finance Minister Schaeuble’s warning that ESM shouldn’t be used to capitalize the Spanish banking system directly.

Spain isn’t our only concern though. Immediately on the docket, we have to important elections to focus on: the French Presidential and Greek parliamentary elections. The French vote is offering the FX market some stress because incumbent President Nicolas Sarkozy has fallen behind in the most recent polls against Socialist François Hollande (48 to 52 percent). Sarkozy has been a strong presence behind the regional rescue efforts and ardent supporter of the euro, while Hollande is expected to make waves and push back on austerity.

As the region’s and EZ’s second largest economy, it may seem a crisis in waiting for France to usher in a socialist president; but it is unlikely that the new leadership would really push back with regional stabilization. Far more concerning is the outcome of Greece’s election. The level of recession and discontent within the country is so high that it very likely that the composition of the government will take a decisively more anti-euro position. A few media outlets quoted unnamed senior officials in Greek that suggested the outcome would likely turn out to be a strong anti-euro take.

It may seem that the fundamental outlook is heavily front-loaded next week, but the situation can turn or deteriorate quickly at any point (improvement will likely come at a more restrained pace). Other highlights to watch for include Greek and EFSF bond auctions scheduled for Tuesday as a measure of confidence post elections. On Friday we have updated ECB forecasts to follow up on the rate hold. – JK