Euro Gains versus Dollar Despite Clear Euro Zone Troubles – Why? 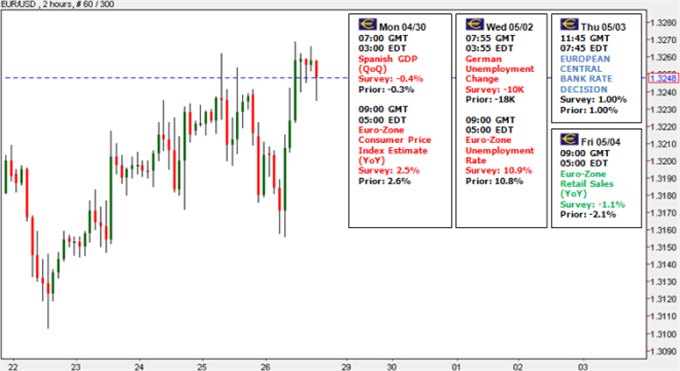 What a week for the Euro and the Euro Zone. The Dutch government collapses, Spanish unemployment surges and Standard & Poor’s downgrades Spanish government debt—yet the Euro trades to fresh monthly peaks! Pronounced weakness in the US Dollar was the real story, but the coming week brings a highly-anticipated European Central Bank rate decision as well as US Nonfarm Payrolls data. Volatility seems guaranteed.

How is the Euro stronger despite clear regional stresses? It isn’t; the US Dollar is weaker. Among G10 currencies only the Euro and the tightly-controlled Swiss Franc trade lower against the US Dollar through the month of April. What does this mean for short-term price action? Simple—it would likely take substantial US Dollar weakness to push the Euro/USD exchange rate to fresh multi-month peaks near $1.3380. Combined with a bearish technical forecast, we might see the EURUSD buck the trend and trade sideways or lower in the week ahead.

A late-week European Central Bank rate decision and US Nonfarm Payrolls report could have fairly significant effects on both the Euro and the US Dollar. Interest rate traders predict that the ECB will leave interest rates roughly unchanged through the coming 12 months, and as such a rate move seems exceedingly unlikely. Yet clear Euro Zone fiscal stresses emphasize that all is not well in the single currency zone, and many expect the central bank will need to step in with further aid for at-risk banks and sovereign nations. According to a Bloomberg News survey, most economists believe that President Mario Draghi and the governing council will soon restart the Securities Market Program (SMP) to buy sovereign debt. Will that happen at the upcoming meeting? We certainly can’t rule it out. And a positive reaction out of Spanish and periphery debt may actually provide a short-term EURUSD boost.

US Nonfarm Payrolls could be another key difference-maker. The US Dollar has sold off on expectations that the US Federal Reserve will keep interest rates near zero percent through the foreseeable future, and further disappointments in labor figures could only worsen forecasts. Predicting a Nonfarm Payrolls print—much less how the US Dollar may react—has historically been a fool’s errand. All that’s clear is that a material disappointment in April numbers could reignite speculation that the US Federal Reserve can ease monetary policy further and enact Quantitative Easing yet again (QE3).

Given market indecision surrounding Spain, France, the Netherlands, the United states, what really matters for the EURUSD? If correlations are to be believed, the US Dollar itself will continue to trade inversely to moves in the US S&P 500 and broader risky asset classes. This implies that further S&P gains may be enough to drive the EURUSD higher.

Financial markets remain especially complacent as stock markets edge near multi-year peaks. Yet the storm often comes after a prolonged period of calm. The S&P 500 Volatility Index (VIX) trades at a mere 16 percent—near its lowest since the onset of the financial crisis in 2008. Does that mean that stocks are headed lower? No. Yet we advise caution against becoming too bearish the USDOLLAR amidst relative calm. The turn could come sooner than expected or we may wait months. Yet the coming week’s event risk would be appropriate timing for the next major market moves. – DR