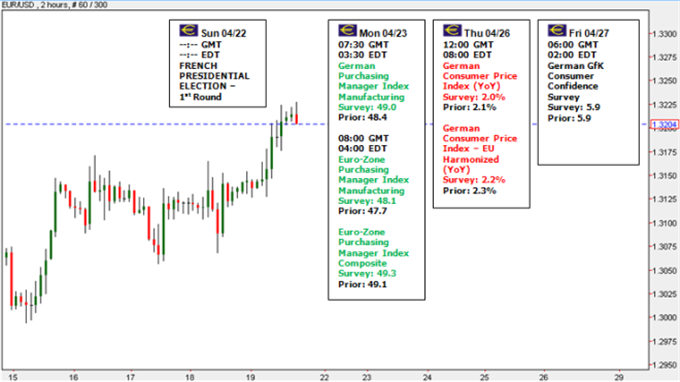 Over the past week, the euro has waded through event risk that posed serious threat to the currency’s stability without significant damage. Nevertheless, traders shouldn’t let down their guard or give up on their aspirations for a meaningful push to trend – as all traders should want for activity. Despite a boost in the IMF’s coffers announced at the G-20 meeting this past week, the Euro-area’s financial trouble is still a pressing issue. Most notable is the wobble for Spain as its drive for austerity is leveraging the pain of recession that the economy was already steeped in. But that isn’t the only concern moving forward.

Given the general restraint on the capital and FX markets for trend generation, regular event risk will be limited to muffled volatility. To truly shift the euro’s bearing and move the needle on momentum via inherent fundamentals, we need something that taps into the deeper uncertainties related to the currency’s health. This weekend’s French election fits the bill for influence and interpretation. Heading into the Sunday vote, Socialist Party head Hollande is leading incumbent President Sarkozy. That said, neither is expected to garner the 50 percent of the vote needed to win, thereby forcing a second round on May 6. Why does this matter? France is the second largest member of the EZ and has played a significant role in the management of the debt crisis. It is expected that Hollande would be decidedly less Euro-friendly that Sarkozy. Further, if it goes to a second vote, the consolidation of parties would bend Hollande even further away from the Euro and the current path of regional support to win the support of fellow candidates. This will likely build pressure and set precedence for May 6.

After the headlines for France recede (perhaps even before), the market will likely return to its assessment of the regional financial crisis. This past week, we weathered two rounds of Spanish bond auctions with limited fanfare. It seems the market needs to see a near failure or failure (falling short of the minimum) to deem the event seriously negative for the region’s financial situation (as with the April 4 sale). In reality, the yields demanded (a sign of confidence) have surged. More importantly, we have seen not only Spain’s 10-year government bond yield rise on the open market, but Italy’s benchmark is climbing as well. Once again, it is the 7 percent-mark that the market expects to force a bailout (as it did with Greece, Ireland and Portugal), but the ECB would likely put up a fight before we get there.

We should also account for the impact that the recent news that the IMF had raised an additional $430 billion in fire power. While Managing Director Lagarde (amongst others) has expressly stated that capital will not be earmarked for any single country/region; in practice, the Euro-area seems most immediately in need. That said, round after round of stimulus in the past has failed to impress market participants and revive their bullish ambitions for the euro.

From a data perspective, the docket carries a few notables. In addition to the French polling results, newswire mavens will also take in the advanced April PMI figures (good proxies for GDP) and the 2011 Euro Zone government debt-to-GDP ratio. After that, Thursday will hold regional sentiment figures and German CPI stats. For serious data, I’m waiting for the Spanish 1Q GDP (due early on April 30).

Data and regional issues aren’t the only concern though. It is important to also keep a close eye on the underlying level of risk sentiment. If fear starts to seep in for the global markets, the most troubled regions will be exposed; and the Euro is at the top of that list. – JK