Euro Sticks to Range, but Losses Likely on Spain and Italy Troubles 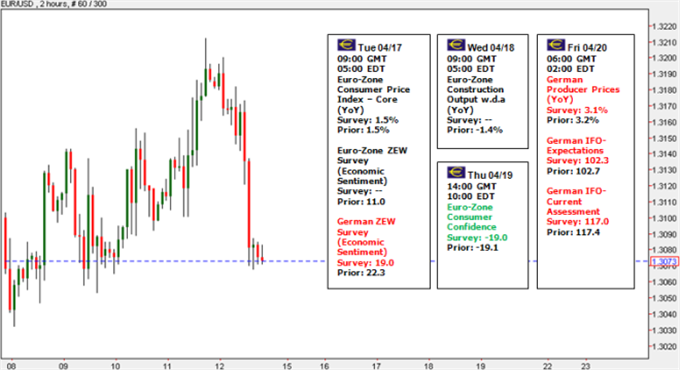 There are three types of price trends: up, down, and sideways. The Euro remains stuck in fairly well-defined 11-month downtrend, but 2012 has produced a shorter-term uptrend, and the last 6 weeks have kept the Euro/US Dollar within a narrow sideways trend. Where’s the resolution?

When there are any doubts on the short-term trajectory of a currency, we always defer to the bigger picture; for the Euro that leaves an important downtrend intact as long as the Euro/US Dollar remains below February highs of $1.3487. The EURUSD looked as though it would break through significant price resistance as the Dow Jones FXCM Dollar Index (ticker: USDOLLAR) saw its largest single-day decline in 7 weeks. Yet sharp sell-offs in European sovereign debt markets forced the Euro lower against the safe-haven US currency through Friday’s close. The spread between 10-Year Spanish Government Bond Yields and the benchmark German Bund finished at a significant 4.24 percent. The substantial differential is the largest since the depths of the Euro Zone crisis through late 2011 and a clear warning of what may be to come.

Foreseeable Euro Zone economic event risk will be relatively limited in the week ahead, but traders should watch out for major surprises in Euro Zone Consumer Price Index inflation figures and a German ZEW Business Confidence survey on the 17th. Investors remain focused on whether the European Central Bank will move to cut interest rates further or introduce other measures to ease monetary policy. Why? Interest rates matter, and lower European yields would likely push the euro lower against major counterparts. Any lower-than-expected CPI figures could boost the case for ECB rate cuts and the Euro could fall in kind.

Yet the largest issue on the horizon feels all too familiar: Euro Zone fiscal debt crises. A clearly disappointing Greek deficit report reminded traders that troubles are far from over. Yet further Greek troubles mean little in comparison to a deterioration in Spain’s fiscal balances, and the surge in Spanish bond yields warn that investors are wary. What’s next?

We will need to see a significant improvement in Spanish and Italian bond markets for the Euro to make a sustained move higher. How might that happened? According to a poll conducted by Bloomberg News, 17 of 22 economists expect that the European Central Bank will restart its purchases of regional sovereign debt via the Securities Market Program. Yet, in this author’s opinion, selling pressures on Spanish and Italian bonds might be too great for the central bank to overcome.

It is one thing for Euro Zone nations to band together in order to bail out Greece, Portugal, and Ireland. Yet Spanish and Italian economies and fiscal debts dwarf those of the smaller states, and investors are setting the stage for a real showdown on sovereign credit risk.

Keep an eye on Euro Zone debt markets in the week ahead as any clear deterioration would likely produce further Euro/US Dollar declines. What else should we watch? Correlations between the EURUSD and the US S&P 500 and broader risky assets have weakened as of late, but they will remain important for as long as the US Dollar remains the world’s foremost safe-haven currency. Watch stocks—the S&P is down 2.7% in the first two weeks of the second quarter. Continued sell-offs could hurt the risk-sensitive EURUSD. – DR