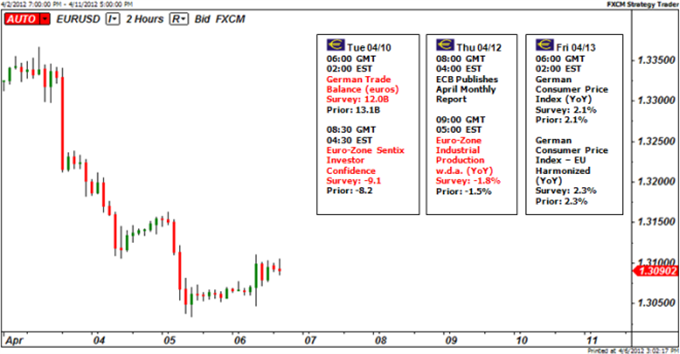 The euro took a painful tumble this past week against all of its major counterparts (even the ones with central bank-backed floors). The skeptical could chalk this up to natural ebb and flow as it is too early to label any specific pair as tipping into a clear euro-bear trend and the over-anxious have suffered false starts before. However, what significantly elevates the risk / opportunity of a major drive this time around is the fundamental pressure building behind the currency this time around. Not only are the risk winds picking up, but we are finding a serious return of crisis fears for the Euro Zone’s still sensitive periphery. And, this time, the fear of crisis is spreading more efficiently to larger and therefore more critical members.

It wasn’t too long ago that Greece was the top concern. We certainly shouldn’t write the country out of the fundamental picture for good; but when there is a critical decision that must be made on immediate risk trends, the something that is a problem later down the line can easily be ignored. We’ve seen this happen many times before with the euro – and with Greece specifically. With the market already talking about the possible need for a third rescue program as the optimistic forecasts for a return to growth fade, it is only a matter of time before this conversation returns.

In the meantime, we have new players at the forefront. And, these Euro Zone members are far more concerning. Since early 2010 when Greece received its first bailout, policy officials have consistently assured the market that this was a ‘unique situation’ and ‘one off’. This guarantee has survived two additional bailout programs for Ireland and Portugal, so it seems ludicrous that the further accommodations and restructuring that Greece drew are off limits. When looking for future threats, it is often best to look at those that have already fallen on hard times in the recent past. Ireland and Portugal are easy targets given their first round rescues.

Ireland recently won a postponement on repaying the promissory note used to bailout its banking system. The market didn’t see too much harm in this move, but this was a clear test of the EU’s rigidity with keeping the favorable terms to Greece’s ‘unique’ situation. More dangerous is the building speculation that Portugal will need another bailout of its own. Even EU officials and the IMF see a good chance that the country will need a ‘bridge’ when it returns to the market in 2013. If the euro is under fire for its financial health, these concerns will quickly turn into active selling points.

More of a risk of turning into an active selling catalyst in its own right is Spain’s financial struggles. Over the past weeks, the Spanish Prime Minister rebuffed EU officials’ 4.4 percent deficit target for 2012 (expanding it to 5.3 percent instead), the country introduced severe budget cuts, the banking sector has come under greater scrutiny for its consolidation and real estate asset evaluation, and officials have said outright that the country was facing “extremely difficult” conditions moving forward. The possibility that this either is a warning of further deviation from requirements or a lead into a bailout request is high.

Aside from the return to surfing the financial headlines for the latest news of the regional financial crisis, euro traders should also keep a close eye on the general balance of risk appetite. For the euro itself, the ECB has kept its modestly hawkish bearing, but the past rate decision has shown that this doesn’t precede a quick return to hikes – merely a slower reaction to further stimulus needs (a risk in itself). Bigger picture, sentiment trends in the capital markets are coming under visible duress. If the broader markets are unwinding riskier exposure, the euro will certainly be cast in an unfavorable light. - JK