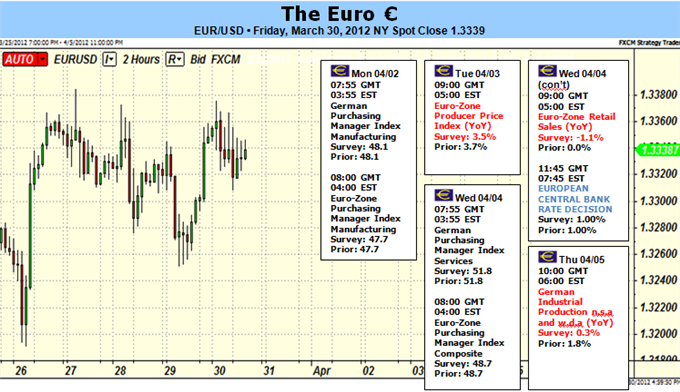 Euro at Crossroads, ECB and US Nonfarm Payrolls May Set Pace for Q2

Euro at Crossroads, ECB and US Nonfarm Payrolls May Set Pace for Q2

The Euro ended the month of March unchanged against the US Dollar (ticker: USDOLLAR), but an otherwise strong first quarter sets the pace for further EURUSD gains in 2012. Yet the coming week of major event risk may prove critical for the Euro and US Dollar as the exchange rate trades near significant technical resistance and at a major crossroads.

All eyes turn to European Central Bank for a highly-anticipated rate decision due April 4, while a potentially game-changing US Nonfarm Payrolls will wrap up what could be a pivotal week in price action. European officials took some pressure off of the Euro as they agreed to boost the firepower of their key bailout funds. Yet it will be important to watch whether ECB President Mario Draghi hints at further monetary policy support for the at-risk Euro Zone economy.

Recent Euro Zone Consumer Price Index data showed year-over-year inflation dip to its lowest levels since August, which may give the ECB the reason it needs to ease policy further. The yearly rate of 2.6 percent remains above official ECB targets of 2.0 percent; yet the trend favors further slowdowns outside of volatile energy prices. Is it enough to warrant further easing? Only the ECB itself can make that decision, and all eyes remain on Draghi’s rhetoric.

Across the Atlantic, the US economic calendar brings its usual slew of early-month data and of course the infamous Nonfarm Payrolls result due Friday. NFP’s are almost always market moving, but March numbers carry extra weight due to recent shifts in rhetoric from US Federal Reserve Chairman Ben Bernanke. Bernanke rekindled speculation that the Fed would enact another wave of Quantitative Easing (QE3) when he warned that the economic recovery seems fragile and the Fed stands ready to increase stimulus if the need arises.

The Chairman specifically cited a sluggish labor market as a risk, but the past several months of US Nonfarm Payrolls data have seen domestic unemployment rates tumble from 9.1 percent in August to 8.3 percent in February.

Ongoing improvements in the US labor market have almost certainly contributed to the best single quarter of Dow Jones Industrial Average gains since Q1, 1998. Is such optimism sustainable? If history is a guide, the Dow move mostly sideways in the quarter that followed those major gains in 1998. It only traded to further highs through the end of the year. And past performance is not indicative of future results, but an 8.1 percent Dow rally in the first three months of 2012 translates to a massive 38.7 percent annualized return. Only 1954 and 1975 produced such lofty annual returns in the Dow dating back to WWII period. One can never say “never”, but a repeat seems unlikely given significant macroeconomic risks across the globe.

If we do see a significant correction in the US Nonfarm Payrolls and similar pullbacks in the Dow, we might expect the safe-haven US Dollar to outperform the Euro and other key currencies (EURUSD decline). Indeed, the Dollar-Dow correlation trades near record strength as US interest rates are near record-lows.

Needless to say, any major surprises in key data and events in the week ahead could be the catalyst to force big moves. We remain in “wait and see” mode as the Euro trades near critical resistance and Q2 promises big moves across financial markets. – DR