Euro Ambitions to Revive Bull Trend May Be Dashed by Dollar, Crisis Fears 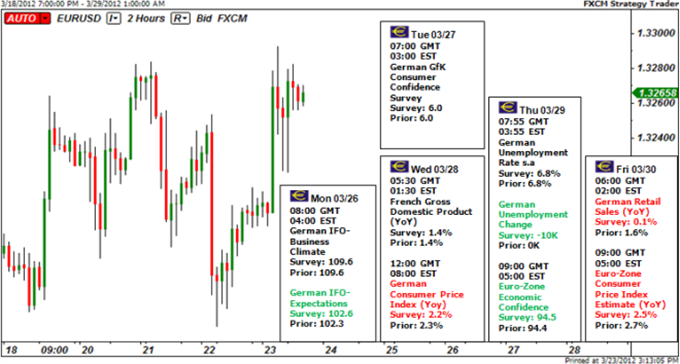 Congestion was the name of the game last week for EURUSD, and that makes sense when we look at the fundamental backdrop for the pair as well as the weight of the technical levels currently restricting its movements. With the boundary of the larger bear trend holding above (1.3300/3500), there is a higher threshold for generating follow through – something more convincing than a rebound founded on a deferred resolution on the region’s persistent financial troubles and growth-inhibiting austerity drive. There are two fundamental themes euro traders should watch going forward: risk appetite trends and headlines regarding the financial health.

Of these two themes, one can work for or against the euro; but the other really holds potential shock value only for the bears. Over the past few years, concerns surrounding the Euro Zone’s ability to balance its member requirements for trim deficits with healthy growth have replaced the calls to further diversify away from the dollar and into this second most liquid currency. Having crested the most recent swell in the ongoing struggle with Greece’s immediate funding needs met, there is naturally a ‘collapse’ premium that will naturally be worked off. However, the rebound for this particular phase threatens to be more reserved. First of all, this is yet another round in a long series of do-or-die situations. Investors are less susceptible to turn optimistic after so many false starts. In turn, it is easier to spot the next swell as the various threats to stability are easier to see.

With that, the markets will be particularly sensitive to negative headlines that pass the wires; and there are plenty of topics that can trigger bearish sentiment. Surprisingly, the most infamous of the region’s members (Greece) does not pose the greatest threat. Nevertheless, there is plenty of negative press: how to handle bond swap holdouts, the IMF warning the country could have its disbursal postponed if milestones are missed and suggestions that there will be funding gaps going forward.

The markets have grown accustomed to Greek trouble. The true risk likes with the crisis spreading. On one side, we run the risk of seeing the other two Euro Zone members that received bailouts have to return for a second dose of support or demand accommodation similar to Greece. Ireland recently reported a 0.2 percent contraction in the fourth quarter, they are looking to win an extension on their €3.1 billion bailout payment due at the end of the month and there is a chance that they could vote themselves out of the chance to tap the ESM in the future. Portugal is a consistent concern for demanding further accommodation because of its pained growth outlook. Perhaps the most prominent threat is Spain. The recent decision by Prime Minister Rajoy to raise the deficit target for 2012 flies clashes with the EU’s demands. Meanwhile regional financing troubles and the banking sectors’ mispricing of real estate assets could prove a serious problem.

Crisis concerns are always kept at the forefront thanks to too many rounds of trouble within the region and the financial media, but the markets have become somewhat anesthetized to the ‘fat tail’ shocks due to the consideration of so many scenarios. This also curbs the short-term impact as we need a much greater risk present. That said, the current behind risk trends can always leverage a sizable reaction from the market. The S&P 500 continues to charge higher, yet we are still struggling for comfort in the drive. A strong jump in risk appetite could possibly play to the ECB’s hawkish lean, but a natural correction in capital markets could set fire to the euro on fire. – JK