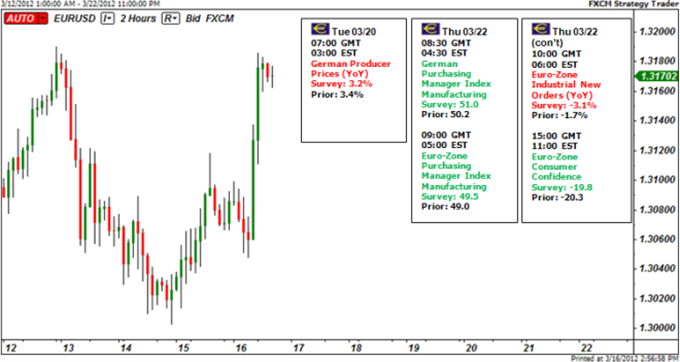 The Euro looked to trade considerably lower against the US Dollar (ticker: USDOLLAR) as the Greenback set the stage for a major breakout, but a late-week reversal leaves the Euro/US Dollar poised for further gains in the week ahead. Limited economic event risk across the G10 suggests volatility may be limited, but recent experience emphasizes that major price moves can and do happen at a moment’s notice.

The biggest Euro story of the past week was that the European Central Bank struck a fairly cautious view on inflation, and 1-year forecasts for ECB interest rates are now at their highest since August, 2011. The previous week’s breakthrough in the Greek fiscal crisis shifted market focus away from the minutiae of government negotiations, and clarity brought eyes back to the traditional short-term forex market movers in broader financial flows. The US S&P 500 finished the week above the psychologically significant 1,400 mark for its highest close since May, 2008. A strong overall shift towards risky asset classes hurt the safe-haven US Dollar and supports our forecasts for further EURUSD gains.

European economic data will be limited to seldom market-moving Purchasing Managers Index data, and we’ll instead look to the S&P and other key asset classes to drive Euro/US Dollar moves. The S&P 500 Volatility Index (VIX), which effectively measures the cost of speculating on and hedging against major equity market moves, now trades at its lowest levels since the beginnings of the financial crisis in 2007. The S&P itself is up 11.7% year to date—an incredible 73% annualized rate of return—while the VIX is at a paltry 14.5%. This is clearly an oversimplification, but an annualized return above the VIX implies that risk-free profits can be made. Is this normal or reasonable? Absolutely not. We believe that markets are growing incredibly complacent and run the risk of a dramatic correction through the foreseeable future. But one thing is what markets could do and timing any such pullback is most often incredibly difficult.

As mostly trend traders, we see little reason to call for a significant financial market turnaround if investors seem all too willing to chase year-to-date gains. Analysts cite evidence that the US economy is in the midst of robust recovery as a primary driver of speculative interest in high-yielding assets. The recent calm in Euro Zone tensions likewise removes tail risks to global economic recovery, and our DailyFX 1-Month Volatility Index (our FX equivalent to the S&P 500 VIX) trades at levels not seen since 2007. In such an environment we see little scope for a major US Dollar reversal, and indeed the Euro could be a major beneficiary of near-term Dollar weakness.

Recent CFTC Commitment of Traders data shows that large speculative futures traders continued to scale back EURUSD short positions through the seven days ending March 13. Further short covering could push the Euro to fresh highs, and we see technical evidence that the EURUSD could break above $1.3290 as long as it remains above $1.3045. Market fundamentals tell us that few investors seek the relative safety of the US Dollar. In fact, safe-haven US Treasury bonds saw their worst week-long sell-off in four months and yields traded significantly higher.

Most signs point to US Dollar losses and Euro gains, but our trading bias is clearly not without risk and we will watch for any signs of a turnaround in complacent financial market sentiment. – DR