Euro at Risk as Markets Look Past Greece to Growth, Rates Outlook 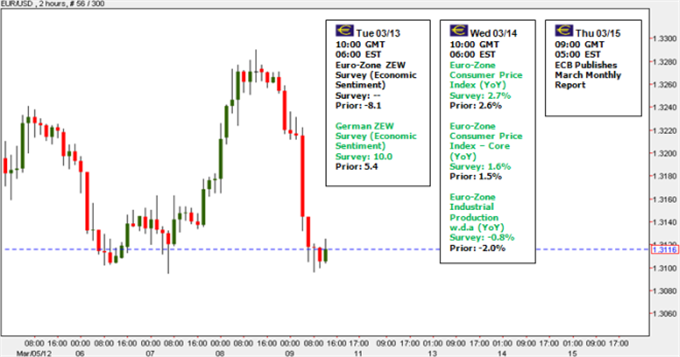 It appears the Greek drama that has preoccupied financial markets over recent months has finally come to something of a conclusion. Athens completed the PSI bond swap with over 95 percent participation from debt holders after invoking collective action clauses (CACs) built into paper governed by Greek law, meeting the requirements needed to unlock funding through the €130 billion second EU/IMF bailout package. ISDA – the organization in charge of triggering sovereign CDS contracts – termed the outcome a “credit event”, meaning investors that bought swap protection against a default will be paid out.

In practical terms, this means relatively little. A Greek default – even a disorderly one – has not amounted to a material threat for global financial markets for some. Indeed, EU banks have had enough cash on hand to prevent a Greek default from triggering a market-wide credit squeeze since the first 3-year ECB LTRO operation in December. The danger was downgraded even further after the second LTRO outing in February, with regional lenders building a war-chest of close to €1 trillion. At the time, this was enough to offset losses on all outstanding bonds from Greece, Spain and Portugal (according to data from the OECD). Needless to say, the paltry €3.2 billion in CDS payouts now triggered by ISDA don’t amount to a significant game-changer in this environment. If anything, the completion of PSI means that a heretofore hypothetical Greek default no longer lays claim to LTRO money, leaving more to cover other potential flare-ups.

With the Greek distraction thereby behind them, the markets’ focus can return to the core fundamentals shaping the outlook for the Euro. This process seemingly began to play out in the first six days of March but was once again derailed by PSI-linked speculation late last week. The outlook for economic growth is dour, with economists’ median forecasts (as gathered by Bloomberg) pointing to a recession that trims 0.4 percent from Eurozone GDP this year. Prospects for 2013 are only a little better, with the currency bloc expected to grow at a paltry 0.9 percent. With EU governments in deficit-cutting mode, any help in alleviating the downturn will have to come from monetary policy, which points to additional ECB easing that invariably puts pressure on the single currency.

For its part, the central bank doesn’t appear to be in a hurry. ECB President Mario Draghi acknowledged that growth faced “downside risks” and predicted a “very, very gradual” recovery. At the same time however, he warned that rising energy costs would send inflation above the target 2 percent this year and bemoaned the prospect entrenching price-growth expectations. This means investors will have ample time to dwell on Eurozone economic data and the eventual need for a more aggressive “catch-up” stimulus program. The Euro’s sensitivity to benchmark German bond yields hints this process is likely to weigh heavily on the exchange rate. We may get a preview of this dynamic with the March set of German ZEW investor confidence figures due next week. Expectations call for a shallow improvement, which would be consistent with the downgrade of sovereign risk after the second LTRO, but a downside surprise may go a long way toward showing the markets are already starting to fret about the growth landscape. – IS