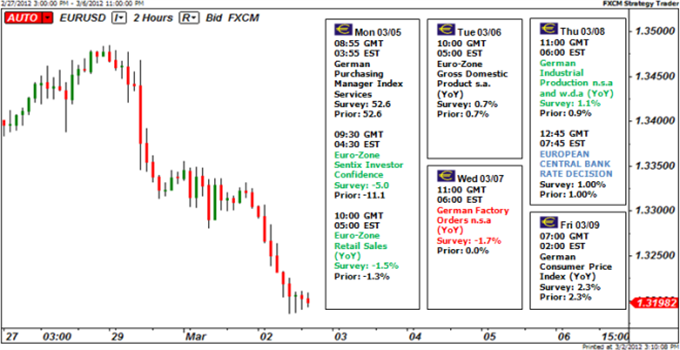 With each week, we seem to pass a serious hurdle for the Euro. Critical votes for Greece’s second bailout package, avoiding a technical default on private holdings of Greek debt for another day and evading a negative interpretation of the banking sector’s health following heavy demand for stimulus (the second LTRO package) have all offered the euro a boost. However, there is a difference between alleviating negative pressure and generating a genuinely bullish fundamental drive. What the euro has faced since its mid-January upswing against the benchmark dollar is fundamental relief. And, a reprieve from bears’ dominance does not necessarily mean that bulls will capitalize. In fact, we are already beginning to see the positive influence of bullish developments diminish – the first step in a fundamental shift where ‘good’ news is discounted while ‘bad’ news leveraged.

Tracking the progress of the euro and meaningful fundamental events over the last month-and-a-half, we can clearly see the balance of influence move out of bulls’ hands. When the euro first showed conviction in its upswing back in the third week of January, the fuel for the fire was mere headlines (and therefore speculation) that Greece was nearing agreeable terms for the private sector bond swap. From there, we moved on to speculation that Greece would finally secure approval for its second rescue package. Yet, when the terms of the swap were announced and the EU ministers actually approved the €130 billion aid package, the good will seemed spent.

This is very much a ‘buy the rumor, sell the news’ mentality set to a larger scale. To establish whether the euro can gather itself and recovery requires an appreciation for how much room there is for conjecture. Having already factored in the positive outcomes for Greece, we may have spent much of the ‘recovery rally’ that the market had in stock. Furthermore, we are finding more and more cracks in the clean façade that speculation seemed to outline for the future. There is still an issue of whether officials will have to use the infamous CACs (collective action clauses) and if that qualifies as a credit event that triggers technical default. Furthermore, it is growing clearer to the investment community that a Greek bailout can collapse at any time regardless of the approvals for future capital.

Adding to the bearish potential, we have new concerns starting to amplify the uncertainties that the Euro area faces. Last week’s Long-Term Refinancing Operation (LTRO) may have topped off the banking system for liquidity, but much of that €530 billion seems to have put on deposit with the ECB and 800 banks finding the need to tap the support line raises concern. Something that was always a risk but is just now starting to find real traction: other, troubled periphery Euro Zone members are starting to show the ill-effects of austerity and are hinting at need for relief themselves. Recently, Spain raised its budget deficit target in spite of the EU, Ireland has said it is negotiating its rescue and Portugal has asked for accommodation with mention of economic troubles. In general, it is important to remember amid this austerity push that the regional economy is expected to suffer a recession…and that is the baseline scenario.

Moving forward, the euro would need a steady diet of pleasant surprises for events that are already priced for negative outcomes to keep the relief advance in place. Otherwise, we would need a genuine fundamental booster for the euro. That would be more difficult to accommodate, but we shouldn’t forget that risk appetite trends themselves can play to the benefit of the fundamentally-troubled euro by leveraging its otherwise modest yield. Speaking of the benchmark rate, the ECB rate decision is on deck for next week. The consensus is for no change to the benchmark rate or stimulus programs. Yet, the masses will hungrily absorb the ECB statement and President Draghi’s remarks. There is also a call scheduled for EU Finance Minister to discuss Greece on Friday, but the chance of unexpected gatherings is far more interesting for speculators. – JK