All on ECB’s LTRO: Will it Prop Up or Dilute the Euro? 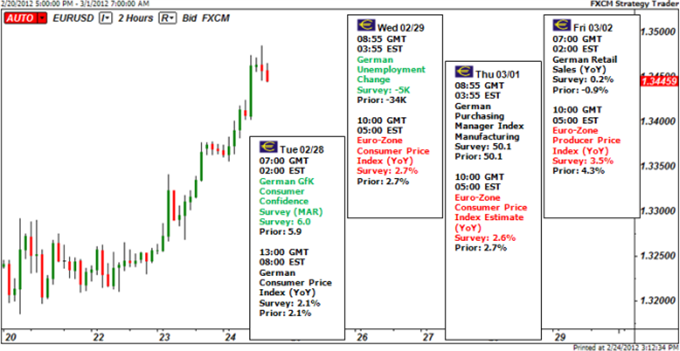 The Euro made some significant headway this week, rallying across the board against the majors (save the Swiss Franc), posting a 2.29 percent gain against the U.S. Dollar. The biggest movement came against the Japanese Yen, with the EURJPY appreciating by a remarkable 4.28 percent over the past five days. Before we delve into the fundamentals, which in my opinion are ultimately bearish, it is worth noting some significant technical developments that lends to a further rally by the EURUSD.

With the EURUSD closing above the 100-DMA and 1.3300 level on a weekly basis, the path has been cleared for a rally to 1.3600. A long-term descending channel has been in place for the past six months, with the topside trendline resistance a few pips above 1.3600. In terms of the intermediate pattern, the EURUSD has been in a short-term ascending channel since late-January, with the upper trendline intersecting the long-term trendline at 1.3600 in March 1. Why is this date for a EURUSD top important?

The Euro’s direction over the next week, and ultimately, over March, will be largely determined by the European Central Bank’s longer-term refinancing operation (LTRO) on February 29. This is the central bank’s second such liquidity operation in the past three months, with the first one in December showing a €498 billion take-up by European banks. The impact of all this extra liquidity sloshing around in the system is undeniably bullish: the FX Carry Trade index is up 5.19 percent this year.

Now that all this extra cash is floating around in the global financial system, the outcome of the second LTRO is likely to be different. Early estimates expect somewhere in the range of €300 to €600 billion of additional take-up by European banks. The amount borrowed from the ECB is key for one simple reason: market sentiment.

On the other hand, if the total amount borrowed from the ECB is more than expected and at the larger end of the range, the Euro will be weighed down by the dilutive effect of the extra funds. However, as we’ve already seen this year, having extra liquidity in the system is bullish, as it would provide extra ‘insulation’ to banks when the sovereign debt crisis rears its ugly ahead in the coming months. The takeaway here is that the LTRO is a proxy to market confidence. Thus, while the EURUSD’s technical pattern in the short-term warrants a further rally, its true direction will largely be determined by the LTRO and the amount of liquidity injected into the system. The question lingers: will the LTRO prop up or dilute the Euro? - CV