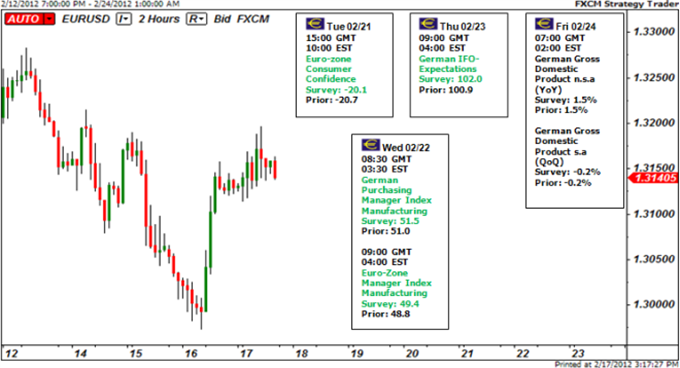 The Euro tumbled, surged, and ultimately finished nearly unchanged as Euro Zone tensions proved similarly unpredictable through a wild week of trading. Greece was the hot-button topic as the Euro moved on any indication that the at-risk government would or would not receive the most recent bailout package. There was an acute sense of déjà vu as Greek troubles feel like the new normal, and further Euro choppiness seems a foregone conclusion as Greece teeters ever closer to a hard default.

Speculation on whether Prime Minister Lucas Papademos’ government will receive further aid is in this author’s opinion little use to the FX trader. Could the Euro tumble sharply if European ministers or the Greek government itself reject aid packages? Absolutely. But placing speculative positions on such is probably best left to political insiders and not those trading off of technical formations on a 60-minute Euro/US Dollar chart. Viewed from that light we could argue that most traders should ignore the Euro altogether. Yet this author believes that current FX sentiment warns that the Euro could bounce sharply, and indeed our Senior Technical Strategist warns of risks that the EURUSD may “explode higher”.

The numbers aren’t pretty; Bloomberg quotes the generic 2-year Greek bond yield at a massive 204.8 percent. Some form of default is a foregone conclusion, and the distinction between a “voluntary” haircut on bonds or a plain-vanilla inability to repay debt seems meaningless. Yet it is exactly such bearish sentiment that makes this contrarian believe the Euro may actually head higher. Newspapers and general market sentiment remain saturated with doomsday forecasts for the single-currency union. Yet when everyone’s looking for a decline there’s likely no one left to sell.

Recent CFTC Commitment of Traders data showed that large speculators are near their most net-short EURUSD in history, while FX Options traders are increasingly betting on and hedging against further Euro weakness. The EURUSD looked as though it could nonetheless break below the psychologically significant $1.30 mark and head to fresh lows. Yet traders sent it sharply higher on what was in this author’s opinion a meaningless market rumor. Markets remain spooked and it could take extremely little to force further short-covering driven rallies.

What specifically are we watching for? Monday’s European summit could theoretically be a game-changer and produce significant volatility across Euro pairs. Yet much the same has been said for just about every European summit since the beginnings of the debt crisis in 2010. Traders remain nonplussed and the euro itself reflects such indecision. Ultimately we’ll change our bias when a true game-changer comes about, but until then we’ll guide our bias according to what we can measure. Current sentiment readings along with key technical patterns warn of an imminent rally.

FX Options traders actually predict volatility will likely remain limited, but the real story lurks below the surface. Traders are paying massive premiums for speculative positions on and protection against Euro Zone tail risks on longer-dated options. In other words—many are prepared for the worst. What does that tell us exactly? The dangers to the Euro Zone are real and investors take them seriously. But an extremely bearish market that isn’t plunging is primed for explosive rallies, and we see real danger of a short-covering surge in the EURUSD through the weeks ahead. – DR