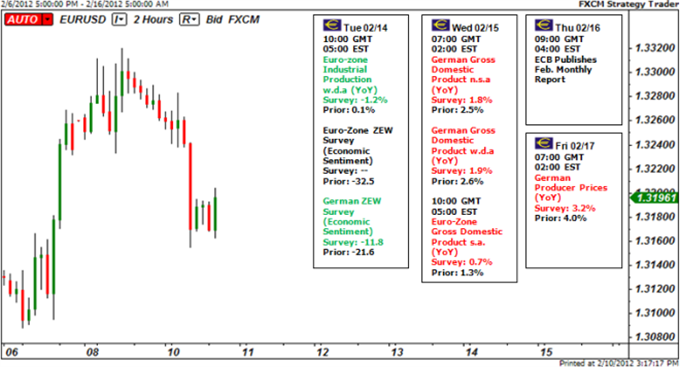 How long can we string this out? That is how we need to look at the euro’s fundamental health. The Greek crisis (it’s fair to refer to the situation as such considering officials are using ultimatums that ‘there is no other option’ or ‘the alternative is an exit from the euro’) is now in its 23rd month, and the outlook continues to deteriorate. There are two levels on which we need to establish our bearing with the shared currency going forward: how does the situation play out over the coming, critical week; and will there be a greater appreciation for the long-term troubles that lie before us?

The past week’s fundamental back-and-forth was a fiasco. Financial headlines splashed broken deadlines, Greece struggled to push through the terms of its next austerity drive and the EU shot the effort down. For a market that has traded off with reacting on all perceived bearish news (while ignoring any positive updates) and then focusing only on the bullish (with no mind paid to worrisome developments) over the past months, the wild oscillations in the outlook for Greece and the Euro Zone were simple too much. At this point, the market has so become saturated with news, that it seems speculators are reserving their judgment for genuine developments. As such, we may find the market is especially critical of the progress (or lack thereof) that is made in the Greek saga through the coming week.

Taking stock of a complicated situation, there is a relatively simple progression that we can follow moving forward. The first step this weekend requires the Greek Parliament to approve the terms of the austerity proposal that the Cabinet approved after the close of trading on Friday. The plan presented last week was rejected by EU minister as it supposedly required another 325 million euros in spending cuts (in additional to the reported 3.3 billion in the draft), sweeping budget reform sanctioned by Parliament and assurances that policy would endure the April elections. Finance Minister Venizelos has framed the vote as a decision on whether the country will remain with the euro. While this may be posturing to encourage compliance – it also sets a tone of ‘no alternative’ to traders.

Should Parliament approve the proposal, we will move on to the consent to the private investor haircuts on their Greek debt holdings. The current terms are for a more-than 70 percent write down, a swap for 30-year bonds yielding 3.6 percent along with growth and EFSF bond sweetners. If that step is checked off, then the EU ministers will decide whether it is confident in Greece’s ability to rein its debt level in to the targeted 120 percent of GDP. If so, the 130 billion euro package (promised last year) can be released. Should any of these steps fail; the aid will not be given. And, we are moving too far along to keep simply moving back deadlines. It was Venizelos himself who said February 15th was the critical point for receiving the second bailout to reasonably make the March 20 bond repayment of 14.5 billion euros.

All of the above is the immediate concern. Clearly, if this schedule falls apart; the market will be solely occupied with its disastrous implications. However, we should also keep the longer-term issues into perspective. With additional Greek austerity, the forecasted return to growth in 2013 seems ludicrous. The weight of austerity and recession could still very likely swamp the country in the end. Furthermore, the risk is not isolated to Greece alone. Portugal looks like it won’t be able to return to the market in 2013 with its yields at current levels, there is talk that Ireland may demand accommodation like Greece and the general region is heading towards recession.

Speaking of recession, we will be reminded of the steady slide into economic contraction the Euro Zone is heading into with 4Q GDP figures scheduled for release. Germany, Italian and French numbers are important; but I will be watch Portugal and Spain more closely. – JK