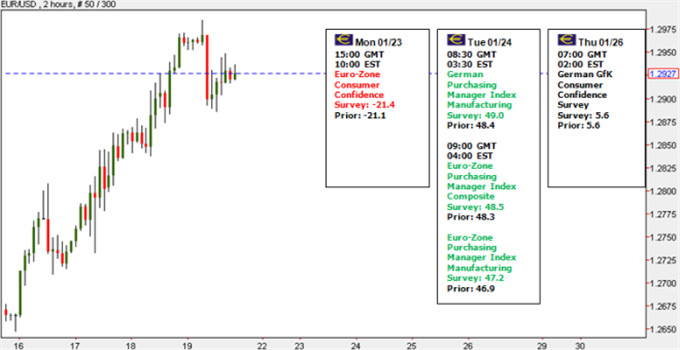 The euro put in for its most convincing rally since the October advance this past week. Technical traders can comfortably label this an overdue correction – and the fundamentally inclined should view it the same way. Yet, as the term would imply, a ‘correction’ is temporary sojourn in a dominant trend. Given the excessive selling pressure behind this shared currency over the past months (evident in the record short-side interest in euro futures exposure measured by the COT report), there is certainly room for further recovery. However, an advance will be under the constant scrutiny of a market that has lowered its tolerance of short-lived breaks from a clear fundamental future. The deepening of the region’s financial penury and the march towards economic sloth will keep any advance on constant edge.

If I were to take a forecast for a month or beyond, setting a bearish projection on the euro would be a straightforward call. By that time, we will see growth indicators flag further and funding issues will most likely return as global financial strain reflects pressure back to the source of the current trouble. Yet, in the meantime, we have a situation where sentiment may have very well outpaced the fundamental reality we are currently faced with. That doesn’t mean to suggest conditions will not deteriorate in the future, merely that they will do so at a slower pace than what has been priced into the market. And, in the meantime, the absence of further catalysts to fear and uncertainty could lead speculative shorts to unwind or fast-moving, opportunistic bulls to ride a correction.

However, countering a dominant trend (the bearish bias is both technical and fundamental sourced) is always fraught with risk. Any headlines or financial tremor that taps into the inherently risk-adverse psyche of the markets can quickly tip the euro back into a strong and consistent decline. As such, we are on the watch for influential updates that could sabotage the passive rebound. There are a number of concerns that euro traders should monitor, but do any of these concerns high probability risk?

The greatest risk to the euro’s nascent advance is the sense of risk appetite itself. A correction for the currency was facilitated by an existing, appetite for riskier assets – as seen by the S&P 500’s labored but steady advance to five-month highs. Should this trend – questionable given the bearish outlook for growth and yields from even the most optimistic policy authorities – flag, the troubled currency can quickly come under pressure of a deleveraging of short-term risk positioning in FX exposure. That said, it is difficult to pinpoint the spark that can unnerve a trend that has preserved through significant disappointments these past weeks. Perhaps US GDP.

Alternatively, we can monitor the European currency’s own interests. After the improvement noted in the round of high-profile bond auctions from this past (France, Greece, Spain, the EFSF), the threat a resurgence of fear in the region’s sovereign-crisis is currently low. Much more open to cross winds is the outcome to the Greek bond-swap negations. Financial media has quoted many contradictory sources that say banks or Greece will cave. Nevertheless, the belief that a resolution is forthcoming seems popular consensus. Conversely, if that is the popular belief, disappointment could prove a volatile market catalyst.

Other events to watch for over the coming week include the regular tender for short-term (7-day funds) for banks, a special three-month facility draw, news of government bond purchases by the ECB and the EU Finance Minister summit on Monday. The data offerings (Euro-area consumer confidence, Euro Zone economic activity for December and German confidence) for the period are important fundamentally, but they don’t necessarily carry the influence needed to alter the market’s prevailing outlook for the medium-term. – JK