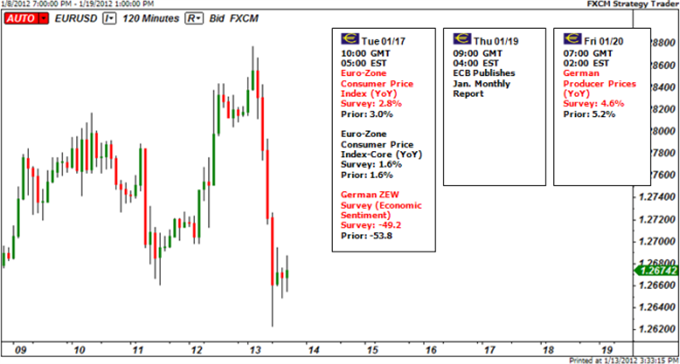 What a week for the Euro. The single currency plummeted to fresh multi-month lows before surging above key technical resistance. Yet initial calls for a larger reversal proved premature as fresh Euro Zone sovereign credit rating downgrades pushed the EURUSD to new lows. Trading remains difficult amidst such unpredictable shifts in market sentiment, and the week ahead promises similar volatility on any and all changes in news coming out of the Euro Zone.

It seems imprudent to take a strong trading bias amidst such incredibly sharp swings in sentiment, and indeed we advise caution in the week ahead on potentially similar moves. The real question is whether recent deterioration in Euro Zone sentiment will be enough to force the EURUSD pair to fresh lows.

Standard and Poor’s spared almost no one as it downgraded the sovereign credit ratings of major Euro Zone countries. France lost its heralded AAA credit rating, while Italy and Spain both saw two-notch downgrades that leave them at BBB+ and A, respectively. Markets seemed focused on France, but it’s important to note that Italy is now a mere notch above ’Junk’.

One further downgrade for Italy could clearly have a negative effect on market sentiment. Yet perhaps more importantly, many investment funds are barred from holding any bonds below investment grade. Given Italy’s substantial debt load, forced selling of Italian bonds could have substantial effects on broader financial markets.

The immediate fallout from recent S&P downgrades may nonetheless be somewhat limited and short-lived given that traders had been pricing in such a possibility for quite some time now. The most recent CFTC Commitment of Traders report showed Non-Commercial futures traders—typically large speculators—were the most net-short Euro against the US Dollar in history. Commercial traders are likewise at their most net-long on record, and market sentiment is quite clearly extreme. The pronounced Euro downtrend undeniably favors continued lows, but reversal risks are especially high amidst such one-sided positioning.

The clear caveat remains that sentiment and positioning extremes are only visible in hindsight, and we could very well continue lower despite the overhang in short positions. This author has admittedly been warning of a potential bounce for some time now, and calling for a bigger EURUSD bounce proved premature.

Thus we’ll favor Euro declines until we see more clear evidence that price and positioning has recovered from extremes. Relatively limited European economic event risk leaves us trading off of broader market flows. It will be critical to watch early-week trade, as the first trading day often sets the tone for price action through Friday’s close. – DR