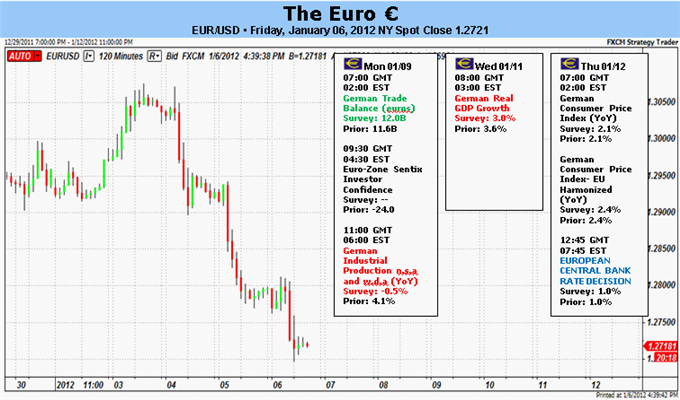 It didn’t take long for the Euro to return to the defensive in the first week of 2012 as traders returned from the holidays to find the currency bloc’s sovereign debt crisis still unresolved and likely to be compounded as member states move to refinance large chunks of expiring debt, over €150 billion of which is coming due just in the first quarter. In fact, the initial catalyst for the next leg of the selloff – a worrisome French bond sale where yields on the country’s 2021 and 2041 paper edged higher while bid-to-cover ratios sank compared to an auction of similar paper in December – was relatively mild, all things considered. Still, the single currency finished the week at the lowest level since September 2010 against the US Dollar.

Perhaps most interestingly, the nature of the selloff seems to be evolving, with the Euro’s behavior following a surprisingly strong US Nonfarm Payrolls reading suggesting that bearish momentum is increasingly driven by hard fundamentals rather than panic liquidation alone. Specifically, strong US data had previously worked to help the single currency, stoking risk appetite sending capital out of the safe-haven US Dollar. However, currency market price action after it was revealed that the US economy added 200k jobs in December rather than the expected 155k while the jobless rate unexpectedly fell to 8.5 percent, the lowest in nearly three years, suggested that something entirely different was clearly taking place. Indeed, stocks fell and the greenback pushed higher while stocks-correlated currencies declined, suggesting hopes of a firming US recovery were no longer enough to cheer investors. Such overt pessimism likely follows a growing appreciation for the implications of the Eurozone fiasco for the global economy as a whole.

On one hand, the crisis amplifies already considerable headwinds facing global growth. Soaring European borrowing costs amid fears of a default within the currency bloc stymie activity as individuals and businesses find it more expensive to spend and invest. In turn, slower growth reduces regional governments’ tax intake, making it harder to reduce deficits, stoking already considerable sovereign solvency fears and producing a vicious cycle. On the other, it threatens to unleash another global credit crunch, plunging worldwide finance into an existential crisis just three years after the 2008 debacle. In the event of a default in a large country like Italy or Spain countless banks, funds and other institutions would be forced to book sharp losses. For some, taking such a hit will prove unbearable and they will be forced to go out of business, sending ripple effects across the markets as their creditors then face debilitating losses, and so forth. Those that remain standing will rush to raise new capital, with banks and funds dumping assets at fire-sale prices to meet reserve and margin requirements. This translates into another broad-based rout across asset classes, erasing incalculable amounts of firms’ and individuals’ wealth. It goes without saying that such an outcome would outright crush private-sector economic activity on a global scale, far outweighing the impact of a marginal improvement in US performance as exemplified by Friday’s jobs report.

Selling pressure is unlikely to let up in the week ahead. First, Angela Merkel and Nicolas Sarkozy are set to hold bilateral talks on Monday, and while the rhetoric is sure to prove cheery, the markets are unlikely to react favorably having seen their share of jawboning and hoping desperately for concrete action. The European Central Bank is expected to keep rates on hold but the focus will really be on the suspect outcome of the 3-year LTRO since most of the funds have not made it into the banking system, and what (if any) additional non-standard measures the bank is prepared to take. Needless to say, continued credit expansion is essentially equivalent to QE and beckons further Euro selling. Finally, Italy, Spain, France and Germany are all scheduled to sell bonds, with traders keeping a close eye on the results as a gauge of solvency fears. – IS