Euro Breaks $1.30 as No Solution In Sight – What Happens Next? 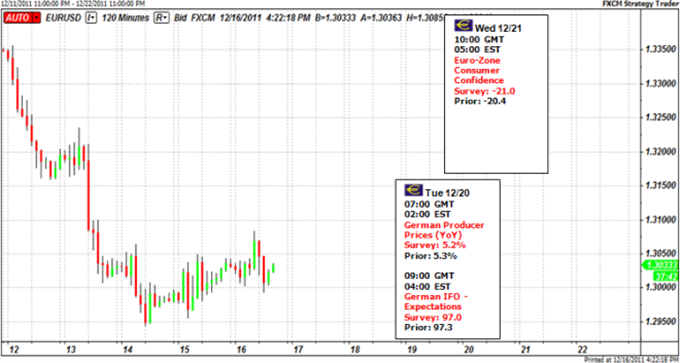 Sharp Euro declines left it below the psychologically significant $1.30 mark for the first time since January, leaving momentum sharply to the downside ahead of the final two weeks of 2011. Traders showed little hesitation in aggressively selling the EURUSD; CFTC Commitment of Traders data shows speculative futures positioning hit its most net-short Euro/US Dollar in history. We see relatively limited scope for continued volatility into the final weeks of the year, but almost literally anything can happen on sharp news headline-driven price swings.

The final two weeks of the year are unlikely to see any major price breakouts, and indeed the Euro/US Dollar could very well consolidate until the New Year. FX Options market volatility expectations have fallen precipitously into Friday’s close; 1-week currency options now price in the smallest currency ranges since the summer. Second-tier economic data could perhaps force modest reactions on any noteworthy surprises. Yet it is unlikely to be a week of sharp breakouts or pronounced currency trends.

Of course recent price action emphasizes that we should expect the unexpected, and any surprising announcements from ratings agencies or European officials could force noteworthy price swings. Both Fitch and Moody’s sparked pronounced EURUSD sell-offs as the former announced it placed France’s top sovereign credit rating on “outlook negative”, while the latter downgraded Belgium’s sovereign credit rating by two notches. Speculation that Standard and Poor’s could join in on the downgrades will keep EURUSD traders on alert into the days ahead. Yet there’s no real way to predict such actions and we can’t really base trades off of such guesses.

One thing is clear: markets are non-plussed with the state of European affairs. Fitch Ratings agency added further fuel to the fire when it downgraded credit outlook on a number of nations and claimed that the European summit did not “materially ease” concerns held prior to the December summit. In fact, “Fitch … concluded that a ‘comprehensive solution’ to the euro zone crisis is technically and politically beyond reach.” In other words: there’s no solution in sight. So what hopes do we have that the Euro Zone could get its house in order and force a Euro/US Dollar recovery? In this author’s opinion, relatively little.

The Euro Zone will remain in a precarious situation through the foreseeable future, and such uncertainty will continue to put downward pressure on the Euro across the board. That said, markets don’t move in a straight line. Recent CFTC Commitment of Traders data showed that large speculators were their most bearish EURUSD in history. The Euro-short trade has become exceedingly crowded, and there are few people left to sell into the EURUSD downtrend.

Extremely one-sided leveraged positions and low volatility expectations heighten risks that the Euro could in fact see a relief rally. In the interests of full disclosure, this author called for an important US Dollar pullback last week and was quite obviously early in such predictions. Yet it seems only a matter of time before we see an important deleveraging before year-end and subsequent EURUSD bounce. Will that happen next week? Sunday and Monday’s trading session quite often sets the pace for the rest of the week. It will be important to watch how markets start off—especially as many speculate there will be fresh ratings action from Standard & Poor’s on Euro sovereign debt ratings. – DR